Bob Banter, known in Japan as Tsugio Kanda 「神田次男」(Kanda Tsugio), is an Obelisk Blue student at Duel Academy and briefly a member of the Society of Light. He carries the informal title of "Quiz King" of the Academy due to his preferred play style. He lacked self-confidence prior to mistakenly interpreting Jaden Yuki's Dueling advice as romance advice.

While Dueling Bob adopts the voice and mannerisms of a game show host and uses common game show jargon, referencing numerous real-world television game shows including The Price is Right, Press Your Luck, Family Feud and Who Wants to Be a Millionaire?

Bob's name, as well as his character, in the dub is a play on the name of Bob Barker, the retired host of the American game show The Price is Right. . The title of the episode in which he appears, "Let's Make a Duel", is a pun on Let's Make a Deal. The game panel itself is similar to the game show Jeopardy!.

In the Japanese version, Tsugio's Surname "Kanda" was taken from the name of a district in Tokyo. This was the subject of a running gag where Alexis would perpetually forget Tsugio's name and instead call "Kanda-kun" by the names of other districts in Tokyo, such as such as "Akihabara-kun" and "Ueno-kun."

At some point, Bob was defeated by the brainwashed Chazz Princeton and became one of many Obelisk Blue students to be drafted into Sartorius' Society of Light.[1] 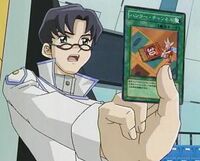 Bob left a message in a chat room seeking romantic advice for when confronting someone out of your league. The message was found by Syrus Truesdale who showed Bob's request to Jaden. Jaden mistakenly interpreted it as someone seeking Dueling advice, responding that all he must do is have confidence in himself. In truth, Bob held strong feelings for Alexis Rhodes and had been saddened by the fact that she considered him uninteresting. (In the Japanese version, she often forgot his name, calling him various other wrong names such as "Akihabara-kun" and "Ueno-kun", both of which are districts in Tokyo.)[1]

Nonetheless, after seeing Jaden's advice, Bob sought out Alexis to express his love and bumps into Jaden, Syrus and Tyranno Hassleberry on the way. When Alexis appears she forces Jaden and Bob into a Duel. Despite Bob's genuinely harmless personality, their duel carried the same stakes as Jaden's other Duels with a Society of Light member; that if Jaden loses, he must join the cult.[1] 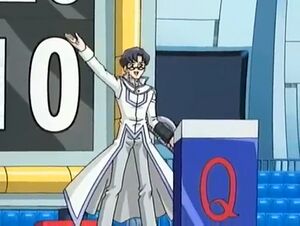 Bob turns the Duel into a game show

Because his Deck quizzes the opponent, Chazz thought Bob had found Jaden’s weakness– forcing Jaden into having to use his mind when he normally relied on instincts. However, after many rounds of difficult questions and tasks, Jaden managed to win, to the disappointment of Alexis and Chazz. During the Duel Bob eventually realized that Jaden was the one who replied to his message. Because Alexis still regards him as being a nobody, he begged for more advice from Jaden, who fled from him claiming to be a Dueling expert not a romance expert. (In the Japanese version he called Jaden "Aniki!" meaning "big brother," the same affectionate honorific Syrus and Hassleberry also used for Jaden.)[1]

Bob appears at the graduation ceremony, having returned as an Obelisk Blue student.[2]

Bob plays an unorthodox Game Show Deck which sets up the Duel as a game show with Bob as the host. The majority of his monsters possess abilities that activate when they are flipped face-up. The effects of Bob's cards force the opponent to complete a mini-game (either a trivia question or physical challenge), causing effect damage to opponent if he is unable to complete the task or inflicting damage to Bob if the opponent can. Once his "Quiz Panel" monsters are depleted the Summoning of "Quizzer Panel 9" allows Bob to return all of them to his Deck for another round.