Bobby (ボビー Bobī)[1] is a character in Yu-Gi-Oh! The Dark Side of Dimensions. He is a friend of Aigami and one of the children with the power of the Prana. 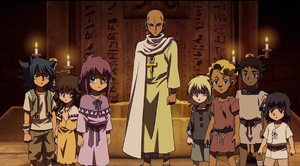 Bobby lived in the house of a slave merchant, along with other orphans, Diva, Sera, Mani, Steve, Chang, and Tanya. The merchant forced them to beg for money, which he would keep for himself. If he was not satisfied with the amount that they brought back, he would scold them and refuse to feed them. One night, Shadi Shin arrived, informed the children that he would be freeing them and immobilized the slave merchant. He pushed on the children's heads, making gold symbols momentarily appear, then teleported each child away, before using the Quantum Cube to make the slave merchant disappear.[2]

Shadi played a mentor-like role in the orphan's lives and taught them about the Millennium Items. In the Shrine of the Netherworld, Shadi warned the children that when the Pharaoh leaves this world, the power of the Prana would be granted to them, but should he ever return the power would be recanted. Bakura's father then entered the shrine and Shadi had him undergo the trial of the Millennium Ring. While the ring rejected him, it accepted his son, Ryo Bakura, granting host to Dark Bakura, who proceeded to kill Shadi. As the children wept over Shadi, they were attacked by Dark Bakura and left unconscious.[2]

Diva, also operating under the name "Aigami", sought revenge on Bakura and to prevent the Pharaoh's return. He was aided by Bobby in some of his plans. Bobby appeared in spirit form before Aigami made Scud disappear. He appeared again when Aigami attempted to make Seto Kaiba disappear. However when Kaiba repelled the powers of Aigami's Quantum Cube with his Duel Disk, Bobby and most of the other Prana children disappeared. He also appeared when Aigami was pressuring Bakura to talk about his time in Egypt.

Bobby and other children, including Sera, watched Aigami's Duels at Kaiba Land. They lost the power of the Prana when Atem returned to defeat the Corrupted Aigami.[2]