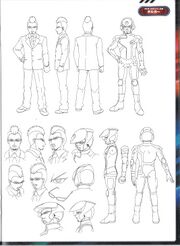 Bolton, years ago, worked along with Robert Pearson in Satellite, and at that time met Crow Hogan.

However after Pearson's death (in the dub, he sent Pearson to the Netherworld), he went on his own to become a racer and successful businessman, and funded his own private company. Eventually his company suffered serious financial troubles and is close to bankruptcy. Bolton attempted to sell rare cards to an investor, but he declined and said that he would buy the incredibly rare "Black-Winged Dragon" card, which just happens to be the very card Pearson used. Bolton assumed Crow must be the current owner of "Black-Winged Dragon". Later that day Bolton gets a visit from Crow, who was digging into Pearson´s mysterious death. Bolton then learns from him that Pearson at the time was Dueling against an individual who used "Crimson Mefist". Bolton reacts to seeing the card, to which Crow then asks him if he knows anything about it, but Bolton doesn't want to tell him.

Because of this, Crow gets angry with him and tries to leave. However, Bolton challenges him to a Duel. If Crow wins, Bolton will reveal what he knows about that incident, but if Bolton wins, he will take "Black-Winged Dragon", admitting that he needs that card in order to sell it to the investor. Crow accepts the challenge, though he clarifies that he doesn't have "Black-Winged Dragon".

Their Duel takes place on a private experimental racing field. Bolton was able to overwhelm Crow at first, due to his Anti-Blackwing Deck. However, Crow fights back and Bolton in response Summons "Crimson Mefist", telling him that he was in fact the one that killed Pearson. He revealed at one point in the past, Bolton's and Pearson's Duel Runner research had put on a halt since they did not have enough funds. Some men from New Domino City heard about this problem and came to them to offer the two men an enormous investment to continue their research. However, much to the shock and anger from Bolton, Pearson refused for he wanted the kids to learn that they could do anything without the City's help. Infuriated, Bolton steals the research planning to go to the city and challenges Pearson to a duel, during which "Crimson Mefist" knocked down a lamp that initated the fire that resulted in Pearson's death. That got Crow furious toward Bolton for killing Pearson for his selfish needs.

Bolton is eventually defeated by Crow's "Black-Winged Dragon", which Crow obtained mid-Duel from a hidden compartment in the Blackbird that he had not known about.

He later turns himself in and leaves an order for his company to provide Crow and his friends with financial backing and technical support for the WRGP.

Bolton plays a White Warrior Deck which focuses on inflicting effect damage to his opponent. During his Duel against Crow, Bolton incorporated an Anti-Blackwing strategy, designed to prevent Crow from taking advantage of his Blackwing monsters' abilities to collaborate.

He is also seen with a case of many valuable cards not in his Deck, including a 1st Edition "Witch of the Black Forest".