Boot (ブート, Būto) is a character appearing in the Yu-Gi-Oh! VRAINS anime. Boots are first-generation A.I. that were created by Lightning as the predecessors to Harlin and Bohman that Lightning's organization use as minions, and they are generally partnered with a corresponding Bit. 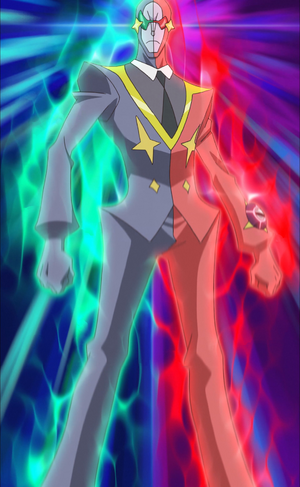 Boots are tall grey-skinned humanoids wearing a grey suit with an orange lining over a grey undershirt, white collar, and red tie. Their face is somewhat exposed; it is pale grey-skinned with a tall nose and a grim expression; their eyes are covered with axe-shaped green glasses. The star-like symbol of Lightning's organization is emblazoned on their coats at the ribs and forearms and at the temples; it glows while using their Skill.

When fused with Bit into BitBoot, the right side of Boot's body is expressed in BitBoot. Their shared body's tie becomes black.

Boots are argumentative, squabbling with Bit after they lost to Soulburner over whose fault it was. In the dub, they speak brashly and simply with a stereotypical gangster tone of speech, in contrast to the more complicated and smoothly spoken Bits.

Boot and Bit have the ability to fuse with one another into a single Avatar; "BitBoot". This fusion allows them to use reliably use different tactics given that they are one body with two brains, and also allows them to use their Skill "Marker's Portal" twice during a Speed Duel, as they are technically still two Duelists.

Lightning created the Bits and Boots as first generation A.I. in his attempts to create an A.I. that could unite the six Ignis into one.[1] Though the Bits and Boots proved to be unsatisfactory, even they still had a crude ability to merge with one another into BitBoots.[2]

Harlin summoned a Bit and Boot to delay Playmaker as he escaped with Bohman, but a new Duelist, Soulburner, appeared and challenged Bit and Boot instead, revealing that he had the Fire Ignis in his possession.[3] Bit and Boot turned their attention to Soulburner and the FIRE Ignis, Flame, combining into BitBoot for the Duel. They Link Summoned "D-Scale Battle Coela" and set up their "Voyage to Hell" combo, backing it up by activating "Judgment Arrows" with Bit's "Marker's Portal" Skill. Soulburner easily dismantled their combo with his ace monster "Salamangreat Heatleo", shuffling "Judgment Arrows" into their Deck and destroying "Battle Coela", then attacking directly. Boot then used his Skill on the next turn to re-activate "Judgment Arrows", then bringing out "D-Scale Fullmetal Dunkle". Although they were unable to defeat Soulburner, they locked down his field with "D-Scale Chaff". Despite this, Soulburner was able to use his "Burning Draw" Skill to draw a new card, "Salamangreat Sanctuary", Reincarnation Link Summoning another "Heatleo" and reducing the ATK of "Fullmetal Dunkle", defeating BitBoot and flinging them into a nearby building. Defused, Bit and Boot began bickering over whose fault it was for the loss, before being "fired" and destroyed by Harlin for their failure.[2]

Lightning summoned several Bits and Boots to take care of The Shepherd, Kenchi and Yozaka, ordering them not to combine into BitBoots to prevent them from reducing their numbers. Although they delayed The Shepherd, they fell in droves to his arm blasts.[1] They also surrounded Soulburner and Flame and prevented them from pursuing Lightning, and Soulburner logged out rather than waste time Dueling them.[4]

Lightning dispatched the Bits and Boots to delay Playmaker and his allies when they invaded Mirror LINK VRAINS, though despite combining into BitBoots this time they didn't delay them for very long and they were easily defeated and erased due to losing within Mirror LINK VRAINS.[5][6]

Bit and Boot use a "D-Scale" Deck, which focuses on quickly swarming the field with materials to Link Summon "D-Scale" Link Monsters and apply various effects based on the movement of those Link Monsters around their Main Monster Zones. They use their Skill "Marker's Portal" to bring out the Link Spell Card "Judgment Arrows" to open up more zones for their "D-Scale" Link Monsters to move between more easily. When using "D-Scale Battle Coela" equipped with "D-Scale Torpedo", they refer to this strategy as "Voyage to Hell" (への, Jigoku e no Kōkai). They also use lockdown cards like "D-Scale Chaff" to temporarily limit their opponent's available strategies.