Breaker the Magical Warrior appears as a Limited Duel opponent who challenges the player to use a Deck with no Spell Cards. 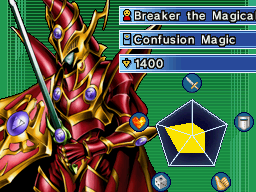 Breaker appears as a Tag Duel opponent partnered with Marauding Captain. They can be unlocked by listening to the Tag Duel explanation in Story Mode.