From Yugipedia
Jump to: navigation, search
For other versions of this character, see Broder (disambiguation).

Broder known as Brave in the Japanese version is a member of Team Ragnarok competing in the WRGP. He is the owner of "Loki, Lord of the Aesir" and the Haglaz Rune Eye. Similar to Crow, he also protects a group of orphans. 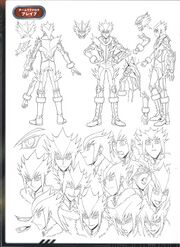 Broder was a treasure hunter who traveled the world for riches. One day, he came across a group of kids that were left for dead after an unknown war caused by Iliaster. He wishes to find a way to save them and stop the organization from destroying everything.

Some time afterward, Broder, along with Halldor, traveled to a distant island in search of the "Loki, Lord of the Aesir" card. Halldor revealed its location on a tree root hidden within a cave. Upon finding it, Broder steals it and tries to escape on a boat. However, Dragan, Halldor, and Sebastian pursue him. During the chase, Broder's boat crashed against a boulder and sent him flying towards a pillar of rock.

However, the final Rune Eye manifested on his eye and a mysterious thunderbolt destroyed the pillar. After the three of them catch up with him, Broder says that they can have the card back, but Halldor says that "Loki" has chosen Broder as its wielder. The three join forces as the chosen Duelists of the "Aesir" monsters[1]

Broder, along with his companions, were on a plane flying towards New Domino City for the WRGP. At the same time, the Three Pure Nobles achieved falsification of history. Broder, along with the others, noticed that their "Aesir" had protected them from the time wave.[2]

Later, Broder and his team appeared publicly to host an exhibition Duel against the other teams in the WRGP, where Dragan chose to Duel Jack Atlas. During the Duel, after Summoning "Thor" and attacking "Red Dragon Archfiend", the two monsters emit a strange wave of energy while battling. Because the force began to destroy the building, the Duel was called off.[3]

Later, Broder and his team witness the phenomenon in the sky and encounter Yusei, Jack, and Crow. Upon finding out that they were in the fight against Iliaster, Yusei asks them to join forces with Team 5D's. However, Halldor reveals that the three Aesir do not wish to ally themselves with the Crimson Dragon because Yusei's father had been the one who caused Zero Reverse and began all this. Because of this, they believe that Yusei himself also carries a destiny of destruction.[1]

Upon the day of their Duel against Team 5D's, Jack defeats Dragan with "Red Nova Dragon", much to Broder's frustration.[4] Broder quickly switches out with him and finishes Jack off by destroying "Thor" and activating its effect. Crow is the next runner up and Broder proves to be more strategic and cunning than him. Crow attempts to force the "Aesir" to leave the field but is foiled by Broder at every turn. He also reveals his reason for fighting in the tournament, which is to protect all the children he had encountered that were orphaned by Iliaster's wars. He then Summons "Loki" and destroys Crow's "Black-Winged Dragon", reducing his Life Points to 50. Crow retaliates by activating two "Black Wing" Trap Cards from his Graveyard, which would inflict enough effect damage for Crow to win the Duel. However, Broder counters with his own Trap Card, and both Duelists' Life Points are reduced to 0, ending the Duel in a DRAW.[5][6]

After Team 5D's defeat Team New World and Aporia, Broder runs onto the track to congratulate them along with Halldor and Dragan.[9] He also observed the Divine Temple cracking the sky and begin to descent upon New Domino City. When the Signers begin to lose all hope of saving the city, Broder along with his team appear before them and show them by using the powers given to them by their gods they can power their Valhallanders.[10] After this he followed Dragan, Broder and Bruno to the Old Ener-D system where they used their Aesir monsters to gather enough Ener-D so that Harald could use "Rainbow Bridge Bifrost" to allow the Signers to gain passage to the Divine Temple in order to prevent it rotating negatively thus stopping it destroying New Domino City and any civilians within 30 miles of. During this event, their Valhallanders began to explode, so they couldn't hold the bridge longer.[11] He and his teammates are later shown alive when Z-one told the people the city was about to be destroyed.[12]

Broder plays a "Nordic Alfar" Deck, which is based on iconic elves from Norse mythology, buffered with Trap support. His ace card is "Loki, Lord of the Aesir".