Buff Grimes, known as Arata Arai ( Arai Arata) in Japanese, is a character in the Yu-Gi-Oh! SEVENS anime. He is the leader of the Washing Club at Goha #3 Elementary. He works for Nail Saionji. 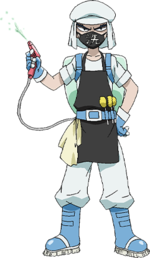 Grimes without his face mask

Grimes is a skinny boy with black hair and black eyes with small pupils, and sharp teeth he usually conceals behind his mask. He dresses in an abundance of hygienic and protective clothing; a clean white shirt with the sleeves rolled up and white pants, blue protective boots with white brushes strapped to the soles, blue finger-less rubber gloves over white ones, a black apron strapped around him with a blue belt with a white buckle, a white shower cap with a brim, and a black mask over his mouth and nose with the Japanese character for "wash" written on it. He also carries a number of cleaning supplies; three yellow wirebrushes tucked into his belt, a dishcloth tucked into the other side of his belt, and a red squirt gun connected to a disinfectant tank he carries on his back, which is painted with a white circle with a red stripe across the middle.

Grimes is a cowardly Duelist with little care for fair play, cheating in his Duels liberally. He arrogantly believes this is one of his strengths, though Nail Saionji believes otherwise. Grimes is a strong believer in the need for cleanliness, both physically and in reputation, claiming that Rush Duels are a stain on Dueling that needs to be erased and commonly using such metaphors in his speech.

Grimes has a short temper, getting easily riled up and panicking immediately at the notion of his plans falling through, be they within or outside of Duels. He shows himself to be vengeful, attempting to get revenge on Romin Kassidy for defeating him in a Duel and switching his revenge to Luke after recalling how he foiled his cheating. It is hinted that Grimes is somewhat insecure, as he cheats in every one of his Duels, something Luke believes means that Grimes has decided he can't win without doing so, and he is shown to be loose-lipped about confidential information when it is insinuated that he would not be important enough to know about it.

Grimes commonly says the English word "Wash" at the end of his sentences, or simply repeatedly.

Grimes wanted to learn more about dishwashing, so he began to volunteer at the A.I. Restaurant.[1]

Grimes cheating while pretending to clean his Duel Disk.

Yuga Ohdo, Romin Kassidy and Gavin Sogetsu were unable to pay for the meal they had eaten at the A.I. Restaurant, so they were tasked with washing dishes under Grimes's supervision until they could work off their debt. Although Grimes was aware that they were pursuing the body of Kaizo, he kept this to himself, though when Romin accidentally shattered several dishes, Grimes decided to try and defeat them himself, believing that his cheating would ensure his victory and prevent Nail from having to face them. He offered to forget about their debts if they could defeat him in a Rush Duel, claiming the format was a stain on the image of Dueling. Romin decided to be the one to Duel Grimes, and though she brought out her "Prima Guitarna the Shining Superstar" on her first turn, Grimes easily weakened it through his cheating to re-use his "Bleach Mortar", but as he was about to swap one of his Set cards out for the final time Yuga accused him of cheating. Grimes angrily denied doing so, pointing out that they couldn't touch his Duel Disk during a match under the Goha Dueling Rules and that it should have detected any cheating. Luke then entered the dishwashing area and used a strange power to deactivate the cheating function, preventing Grimes from ending the Duel that turn. Despite the loss of his cheating device, Grimes returned "Bleach Mortar" to the top of his Deck with "Clean Beret - Colonel Mop" and destroyed "Prima Guitarna". After becoming enraged by Luke's comments, Romin Tribute Summoned "Esperade the Smashing Superstar" and revived two of her monsters to Grimes's field in Defense Position, before granting her two "Romic n' Rollers" the ability to inflict piercing battle damage, allowing her to destroy all of the monsters on Grimes's field and defeat him. Afterwards, Luke interrogated Grimes over Kaizo's whereabouts, and despite Grimes's attempts to play mum, he accidentally admitted he'd seen Kaizo. Yuga and his friends soon found the door to Nail's garden and were able to open it, much to Grimes's shock, and he frantically apologized to Nail for his actions. Nail coldly told Grimes that his cheating was not a strength and dismissed him, leaving Grimes wailing his master's name outside the closed door.[1]

Grimes cheating with his "Arai Angel" technique during his Rush Duel with Luke.

A few days later, Romin and her friends returned to the A.I. Restaurant to have a meal using coupons that Luke had obtained, and Grimes watched them enjoying their meal from the dishwashing room, plotting his revenge. He modified a waiter Drone to splash Romin with water and take her away under the pretense of cleaning it off her, but the Drone brought back Luke instead, who Grimes trapped in a cage. Grimes was furious that the Drone had kidnapped Luke, the one Duelist who he couldn't cheat against, but after Luke was unable to use his "Luke Devil" power to deactivate the cage, Grimes realized Luke couldn't use his power to stop him cheating and released Luke after he challenged him to a Duel while babbling about being turned into a Dueling Superhuman. Although Luke Summoned three Dragon monsters, he voiced a desire to set Grimes on the right path, claiming he had set Grimes on the wrong one. Denying any such notion, Grimes cheated even more brazenly than before, calling it "Arai Angel" in contrast to Luke's "Luke Devil", rearranging the top cards of his Deck to force Luke to draw more cards, then using his "Cleanliness General - Big Tidy" to make Luke discard his hand and draw more cards in an attempt to Deck him out. As he Summoned his second "Big Tidy", Yuga, Romin and Gavin arrived and tried to use Luke's power to stop Grimes from cheating, but they were unable to do so, though Luke simply decided to use skill to beat Grimes and flipped his "Big Tidy" face-down with "Dragonic Disorder". Although Grimes had failed to Deck Luke out, he was confident that Luke would be unable to defeat him due to the high DEF of "Big Tidy" and the high LP he'd gained from his combo, but to his horror, Luke destroyed all the monsters on his field and then Summoned three high-Level Dragons, defeating Grimes. Yuga then asked Grimes if he knew where the Gate of Curiosity was, but Grimes refused to tell them until Yuga insinuated that he didn't even know the location, causing Grimes to reveal the Gate's location before he realized what he said. Grimes was confident that Yuga and his friends wouldn't be able to get back into the Garden from the A.I. Restaurant due to the reinforced door, but Luke' used his power to deactivate the lock, and afterwards Nail dropped Grimes down a trapdoor.[2]

Grimes, Schrödinger Nekoyama, and Seatbastian were tasked with examining the data of the Goha Rush Duel Team Battle Royal in Nail's haven to determine who was behind the tournament and the actions of Goha 66 and ordered to report to Nail if they found anything.[3] However they had little success due to their limited tech skills, but Tyler Getz and Toombs arrived to take over due to Tyler's hacking skills. As Tyler worked, Grimes began pointing out sections of the data he had already "washed" until Toombs distracted him with scary stories.[4] Grimes and Toombs eventually began providing Tyler with calories to maintain his workload as Roa called Tyler for updates while Yuga and Luke prepared to Duel. As the power began to fail as Tyler finally found what he was looking for; someone had been using the Goha Rush Duel Team Battle Royal to hack the Goha Duel Server to uninstall Rush Dueling, and Grimes learned over the phone that the server was located on the moon.[5] The Heavy Cavalry Duel Club destroyed Otes' Relic, thought to be responsible for the hack, but Tyler confirmed the process couldn't be stopped. Although Rush Dueling was eventually uninstalled after Luke defeated Yuga, Yuga and Nail were able to reinstall it in the Super Rush Robot.[6]

Romin called Grimes to Goha #7 Elementary to help wash down Yosh Imimi, Swirly and the members of Goha 7th's Concert Band Club. Grimes hosed the five of them down and Romin congratulated him before he left.[7]

After Mimi was unable to pay for the all-you-can-eat buffet she had treated the Goha #7 and Goha #6 Elementary Student Councils to, she was put to work under Grimes to work off her debt. As Grimes brought Mimi more and more dishes, she cleaned the trove of plates in an instant, impressing Grimes, though to his dismay she'd noticed some of his dishes were dirty and ordered him to wash them again; Grimes quickly hurried to comply.[8]

Grimes uses a WATER Deck themed around cards with a cleaning and military motif. He uses a cheating mechanism installed in his Duel Disk that allows him to swap his Set Spell or Trap Cards with those he desires, or place specific cards on top of his Deck. In his Duel with Romin Kassidy, he uses "Bleach Mortar" to reduce the ATK of high-Level monsters and inflict effect damage, while using effects that recycle Spell Cards back into the Deck such as "Clean Beret - Colonel Mop" or "Washsprayer the Cleansketeer" to activate it multiple times per turn. In his Duel with Luke, he instead uses a Deck out strategy centered around using the effects of "Scrubbing Santa Cloth" and "Cleanliness General - Big Tidy" to force his opponent to repeatedly draw cards in order to drain their Deck.