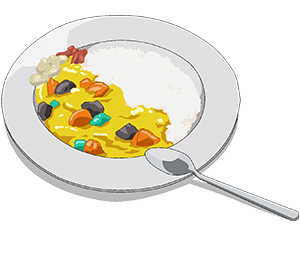 A dish of Bunker Strike Curry.

Bunker Strike Curry (バンカー・ストライクカレー Bankā Sutoraiku Karē) is a curry rice dish in Yu-Gi-Oh! SEVENS. It was cooked by Luke in an effort to replicate Romin Kassidy's Dragias Curry, without the explosive side effects Romin's cooking is commonly feared to have. Luke gave the curry its name for its yellow coloration, which is close to that of his "Piercing Dragon Bunker Strike", though other characters note it isn't any different from normal varieties of curry.

Luke cooked this curry after returning from trying to watch the Goha Meteor Shower, desiring to replicate Romin Kassidy's Dragias Curry without any of its explosive qualities after being reminded of it due to her Prima Guitarna Curry. His efforts resulted in an ordinary yellow curry dish, though he was still satisfied with the taste and proclaimed it "Bunker Strike Curry". As he was the only one who ate it, this enabled Yuga to track him the following day with his "Last Night's Dinner" Road after Luke went missing that night.[1]