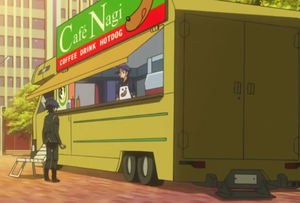 Café Nom seems to mainly serve hotdogs. The truck has a sign labeled "Café Nom. Coffee Drink Hotdog" on the side of it which features a smiling hotdog with a canine nose. The sign can be retracted when the attendance window is closed. It also has a kitchen, several storage shelves, and a coffee machine. According to Kolter, Café Nom gets a large amount of customers at night.[1]

Café Nagi also doubles as Yusaku Fujiki and Kolter's base of operations. The back of the truck has multiple computers which Yusaku and Kolter use for hacking, and a room which serves for Yusaku to go into and leave LINK VRAINS unnoticed.[1][2] Kolter later adds a similar room for Theodore Hamilton.[3] Yusaku usually closes Café Nom when he and Kolter work on fighting the Knights of Hanoi.[1] There is also an emergency lever that can be used to shut off the truck's power.