From Yugipedia
Jump to: navigation, search
For other versions of this character, see Cameron Clix (disambiguation).

Cameron Clix, known as Syuta Hayami[1] or Shuta Hayami[2] in the Japanese and Italian versions, is a character appearing in the Yu-Gi-Oh! ZEXAL anime. He was a Number holder, but was defeated at the hands of the Number holder Yuma Tsukumo, who claimed his "Number" after the Duel.

He owns a D-Pad which also operates as a camera, which he used to predict his opponent's futures while possessed by his "Number".

Normally, Cameron is a kind-mannered and friendly person who is willing to do favors for anyone. This is evident when he takes photographs for people for free, such as when a group of children asked for a group photograph to which Cameron took it and gave it to them.

Whilst his desires and darkness amplified by his "Number 25: Force Focus", Cameron becomes quite malicious, defeating his opponents mercilessly and then leaving them on the floor whilst he takes their Heart Pieces. He even went so far as to put innocent lives on the blimp in danger, just for the sake of his "scoops". After being defeated by Yuma Tsukumo, Cameron returns to his normal self, apologizing to Yuma and Tori for all of the destruction which he caused whilst being possessed.

In the past, Cameron was a well-known photographer who took pictures for people. He also befriended Tori Meadows in the past and took many photographs of her as she was deemed model-worthy by him and the people he gave the photographs to.

Some time after this, Cameron was taking photographs in a rose garden when he noticed a blank card on the ground, which turned out to be a "Number". Picking up the card, it transformed into "Number 25: Force Focus", and he inadvertently had his desires amplified by it. This "Number" granted Cameron the ability to predict the future through photographs, namely to cause destruction such as making cruise ships crash and catching airplanes on fire whilst in the air. These masterful photographs awarded Cameron many awards within the press, making him a wanted-photographer by many media organizations. Those which couldn't get him, wanted him gone as his photographs made the magazines he worked for sell better. 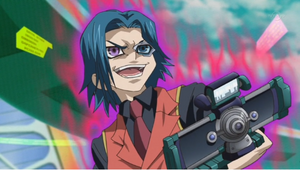 Cameron possessed by the "Number".

Kari Tsukumo's boss tells her to watch out for Cameron as he has been spotted in Heartland City. Of course, due to his "Number", he was there causing destruction, defeating Duelists by bewildering them with his future knowledge and then taking their Heart Pieces as a contestant in the World Duel Carnival. Kari managed to find Cameron just as he predicted the future of scaffolding falling on a builder he was Dueling. There she found photographs of the events. 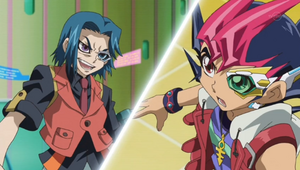 After Tori argued with Yuma Tsukumo about Reginald Kastle, she stormed off to the site of a blimp which was going to fly around Heartland City. Tori noticed Cameron, whom greeted her and then took a photograph of her before she departed on the blimp. Unbeknownst to Tori, this secured her doom as the photograph showed her on board the blimp and about to crash. Cameron is later challenged by Yuma to a Duel to save Tori.[1] As the Duel progressed, Cameron managed to gain the upper hand by predicting all of Yuma's moves correctly. Astral eventually figured out, however, the true power of the "Number" was only seeing possible futures and not actually predicting the future, and that Cameron was only winning by tricking his opponents into making them happen ("self-fulfilling prophecies", as he called them). By defying Cameron's prediction and doing something different than what he predicted, Yuma managed to Summon his "Number C39: Utopia Ray" and defeat Cameron.

After Kite Tenjo managed to save the blimp and the people within it from being destroyed by the crash, Cameron appeared before Yuma and Tori and apologized. He then took a photograph for the two as a memento and token of his apology.[2] 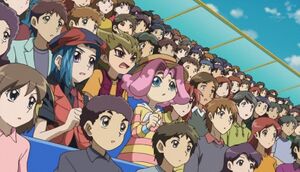 Cameron watches the finals of the WDC.

Cameron is next seen sitting next to Pip among the spectators (one row down from Cody Callus) watching Yuma's Duel with Vetrix in the final round of the finals.[3]