From Yugipedia
Jump to: navigation, search
For other versions of this character, see Camula (disambiguation).

Camula is a vampire who is the second of the Shadow Riders. She's very serious when it comes to Dueling, for she hopes to revive her race from its destruction by the people of Medieval Times. In the European Spanish version, she speaks with a stereotyped vampire accent. 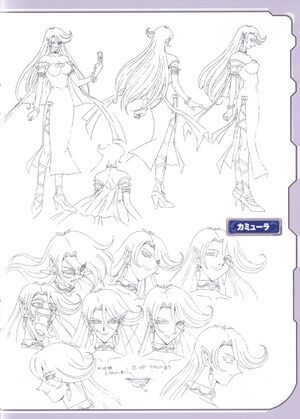 Camula's Lineart. Her design incorporates a wide range of expressions. Depicted here is the Shadow Rider in full regalia from front, side and rear alongside views of her head from different angles.

Camula's character design was overseen by Kenichi Hara. Her usual outfit consists of a long dress, displaying her cleavage with long slits revealing the side of her legs, straps crossing her arms just below her shoulders attached to a cape and bat broaches below her cleavage and above the slits, gold armbands and bracelets on both arms and heeled shoes with laces continuing up her shins.

She has long straight green waist length hair with 1 large curl above her forehead. She wears her own exclusive Shadow Rider Duel Disk that's Monster Card Zones are in the shape of bat's wings, on her left arm.

Her name comes from Carmilla, a vampire story that predates Bram Stoker's Dracula. It was first published in 1872, printed in a magazine called Dark Blue.

Centuries ago in Middle Age Europe, Camula was a member of the proud vampire race that lived in isolation from humanity, but seeing how humans see them as monsters, they were exterminated by them. Camula had managed to survive until the present day by sealing herself inside a coffin. She awoke much later when Kagemaru uncovered it and invited her to join the Shadow Riders.

She captures the souls of her opponents following their losses within dolls to fuel her cause, and uses the Shadow Charm choker around her neck to bet the souls of others in conjunction with the Shadow Game-exclusive "Illusion Gate", a powerful card that requires her to give a soul to the Sacred Beasts, to ensure victory. Using the souls that she captures, she will resurrect her vampire brethren, and take their revenge on the humans that feared and despised them.

Camula arrives on Duel Academy to obtain the keys and to make up for Nightshroud/Atticus Rhodes' failure. She manages to obtain the keys from Vellian Crowler and Zane Truesdale (thanks to information about their cards and strategies from her bats). While the latter had proved to be a far more challenging opponent, the threat of taking his brother's soul caused him to surrender and lose. Though she was only interested in obtaining a doll of Zane, she Duels Jaden Yuki. However, her Shadow Charm's power is negated by the completed item that Jaden possesses.

Out of over self-confidence, Camula places her own soul on the line (whereas in the original, she does not have a choice because the card was already activated) and it is dragged into the "Gate" by a spiritual claw after she loses, leaving her body an empty husk, which crumbles into dust. In the dub, the part with the spiritual claw going into her back to rip out her soul is edited out.

Camula plays a Zombie Deck, with an emphasis on "Vampire" monsters. Several of her monsters such as "Zombie Werewolf" and "Vampire Bat" can feint revival by either Summoning or discarding additional copies of themselves when destroyed by battle. Camula is also able to combine the recursion ability of "Vampire Genesis" with "Genesis Crisis" to repetitively raise her undead army from the Graveyard.