Captain Cutter, known as Captain Solo in the Japanese version, is a character in the Yu-Gi-Oh! ARC-V anime. He is the captain of the pirate ship that the Lancers use to travel to Duel Academy island. 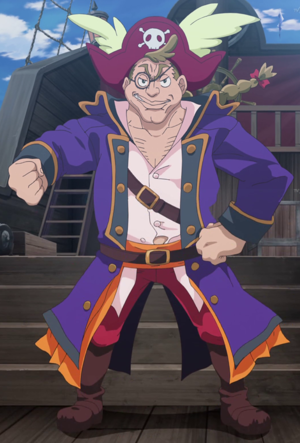 Cutter is a stocky man in pirate's attire. He has long brown hair tied with a red tie in a messy braid, a broad face, beady eyes, and hooked eyebrows. He wears a monocle strapped around his head like an eyepatch. His exposed chest appears to be hairy. Cutter wears a pink buttoned shirt that is sloppily closed and untucked over red pants and simple brown boots. He holds these up with an orange sash under a brown belt with another belt across his chest, and also dons a purple overcoat with a navy interior and brass buttons, and a red hat with wings and a Jolly Roger emblazoned on the front.

In the dub, Captain Cutter speaks with a stereotypical pirate accent, though this was exposed by Sora when he claimed that Cutter was still dressing up. He quickly spoke in perfect English before resuming his pirate accent.

Celina brought the Lancers and Zuzu Boyle to Cutter's ship to take them to Duel Academy. Sylvio Sawatari criticized it for being a pirate ship until Cutter revealed himself. As they sailed to Duel Academy, Duel Academy students arrived by helicopter and Celina took Zuzu hostage. Meanwhile, Cutter forced Yuya Sakaki into a Duel while his crewmates tied Sylvio and Gong Strong to the ship's mast. Cutter Fusion Summoned "Captain Lock", using its effect to prevent Yuya from Summoning or Setting monsters from his hand. Cutter quickly overpowered Yuya, adapting to the use of Action Cards quickly and using the motion of his ship to throw Yuya off-balance. To Cutter's annoyance, Crow Hogan and the rest of the Lancers arrived in a speedboat and rescued Yuya, Sylvio and Gong, and Cutter activated "Battle at Sea", attempting to sink their boat. Runaway student Sora Perse joined the Duel, and Cutter tried to persuade him to return to Duel Academy as Celina had. Sora retorted that they were taking Celina back and defeating him, Fusion Summoning "Frightfur Kraken", which caused the effect of "Lock" destroy itself. Cutter brought "Lock" back with its effects negated and strengthened its ATK in response, but Yuya and Sora were able to combine their cards and defeat him. Despite his loss, Cutter still attempted to pursue the Lancers, but the screw holding his ship's steering wheel had been removed by Moon Shadow when he rescued Gong and Sylvio, leaving Cutter's ship floundering in a circle.[1]