The first time the player met Carly was during the Fortune Cup. As the player, Liquid, and Okita left, she saw them and challenged the player to a Duel to get some information about the Arcadia Movement. She stopped upon hearing a loud roar. She and the player went to the arena and saw the Crimson Dragon. When Yusei was declared the new champion, she rushed over to get an interview. 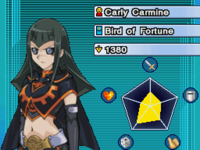 Carly as a Dark Signer.

Carly later got caught sneaking around the Arcadia Movement building and was locked up, but the player managed to free her. As she escaped, she dropped a memo that said that Jack Atlas and Rex Goodwin were from Satellite. Not too long after, Carly was caught by Sayer and forced into a Duel, in which she was defeated and became a Dark Signer. Carly then returned and faced Sayer in a rematch, Summoning "Earthbound Immortal Aslla piscu", and used it to defeat Sayer. As "Aslla piscu" struck the building and it collapsed, Jack came with Mina Simington and searched for Carly, as he remembered how she had encouraged him.

As the Dark Signers began their battles, Carly, along with Kalin and Misty, went to meet their respective rivals. She waited for Jack by an old Ener-D reactor in the B.A.D., but the player arrived first. Carly decided to Turbo Duel against the player in the meantime. The Duel was interrupted when Jack arrived and faced Carly instead. After her defeat, Jack silently activated the Ener-D reactor and left.

Carly was revived at the end of the story line, and the player could face her in Ground Duels in the Fortune Cup's waiting room. 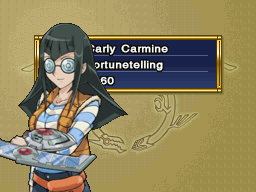 Carly, in Over the Nexus

Carly can be found by the Fountain Plaza, and she can be challenged to Single Duels or Tag Duels, partnered with Stephanie.

The following cards can be obtained after defeating Carly in Single Duels.

The following cards can be obtained after defeating Carly and Stephanie in Tag Duels.