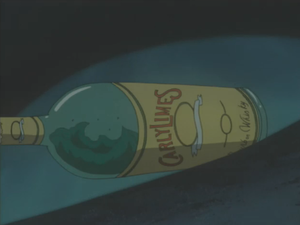 Carly Limes is a brand of whiskey in the Yu-Gi-Oh! anime, drank by Bandit Keith. It is based on the real-world brand Early Times.

The whiskey was drank by Keith, while he drowned his sorrows in alcohol, drugs, and gambling following his loss to Maximillion Pegasus[1] at the United States The King of Duelists.[2] He carried a bottle of whiskey as he wandered outside nightclubs, drank several bottles before nearly passing out on a counter in a bar, and had a bottle of it on a table while taking part in underground Duels. When Pegasus read Keith's mind during Duelist Kingdom, he saw memories of these events.[1]