Cathy (キャッシー Kyasshī), nicknamed Cat-chan, is one of the main supporting characters appearing in Yu-Gi-Oh! ZEXAL manga and one of Yuma's friends. She has an obsession with cats to the extent that she behaves like them and can control them. 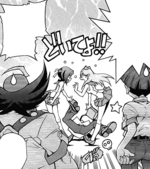 Cathy has a crush on Yuma and often argues with Kotori over him. She is part of Yuma's circle of friends, with Kotori, Tetsuo and Takashi.[1]

After Yuma lost to Kaito and got depressed, Tetsuo formed the Numbers Club together with Kotori, Cathy, and Tokunosuke, in order to help Yuma collecting the "Numbers".[2]

Cathy accompanied Yuma and the rest of his friend to Heartland Theme Park to search for "Number" cards. She went on the Nature Crooz ride with Tokunosuke and then took the rest of Yuma's friends on the ride again. Yuma was separated from them by Captain Corn. When Cathy and Kotori notice it, they jump off of the track in order to find Yuma. Tetsuo, Tokunosuke and Takashi then had no option but jump off as well.[3]

Cathy leaps for the lever.

As Yuma Dueled Captain Corn, the mine carts continued to move down the tracks towards them. They ended up falling the down the tracks, with Tetsuo managing to cling to the tracks while the the rest cling to his legs. Captain Corn changed the direction of the tracks with a lever near them, which caused the mine cart to speed towards them, where it would run them over. Cathy jumped from the bottom to make it to another lever and to redirect the cart again. The lever at Corn's position moved with the one Cathy changed, which hit Corn in the groin. When Yuma defeated Corn, he exploded into a pile of popcorn, which Cathy helped eat.[4] 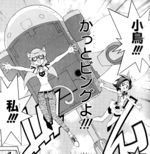 Cathy and Kotori jump from the helicopter in order to save Yuma.

After that, while Yuma Dueled Thunder Spark in the Speed Field, Cathy and the rest of the gang watched the Duel through the helicopter.[5] When Yuma fell in the water, both Cathy and Kotori jumped from the helicopter to the water, doing "Catbingu", in order to save him. However, he soon came back on his own, making the girls' effort useless.[6]

After jumping into the Speed Field's river field in order to save Yuma, Tori and Cathy are soaked. They are inside a dark stone building, and notice a door in the opposite site of the building. It appears to be a dressing room, full of female clothes. Cathy and Kotori then borrow a dry dress for each. Tetsuo comments that the girls kept arguing the whole way to there, and that its odd how they suddenly look like friends, while Takashi complements saying that the situation shows how complicated a girl can be. Cathy and Kotori then ask Yuma if they are cute with that clothes, and start arguing about that. Seeing that the girls have a good relation, but keep arguing, Astral comments that its seems to be complicated to maintain a friendship. Takashi and Tokunosuke then notice a big door there, which they all pass by, entering a dark room, decorated with lots of creepy dolls, and featuring a big stairway leading to a Doll House. Suddenly, Cologne comes down the stairs, holding a candlestick. She welcomes them to her House of Dolls, and Astral notes she is Princess Cologne, who was known as the mascot of Heartland. They then notice she was also an enemy, and she confirms it, saying that Yuma and Astral won't get out of there. But when Cathy replies saying that a short like her cannot intimidate them, Cologne notices Tori and Cathy are using clothes from hers. The girls try to excuse, but Cologne doesn't listen to them, and enraged, throws the candlestick, which surrounds them with flames, and challenges Yuma to a Duel. 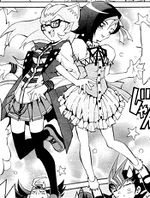 When Yuma uses "Zubaba Knight" with "Shadow Clone Zone", creating four copies of him, Cathy celebrates, but the others stare her, as she caused Cologne to rage.[7] During the Duel, Cologne reveals about her past. Cologne was once a doll, who was bought by a rich girl. However, that rich girl soon bought a new doll, forgetting about Cologne, and abandoning her. She was then sent to the disposal plant of Heartland. There, Dr. Faker picked her up and gave her a life. And then, crying, yells that she doesn't want to be a miserable doll anymore. This feeling strike Yuma and the others, making Yuma hesitate about the Duel. At that time Cathy notes she was the girl who abandoned Cologne. She gets awkward and confused about what to do, but when she decides telling the truth, Kotori says that she was the one who abandoned her, and apologizes. She did this so that Cologne soothed her anger, and that Yuma could concentrate in the Duel, but Cologne knows she is lying, and gets even angrier, throwing oil in the fire surrounding them so that it gets higher, almost hitting them.[8] 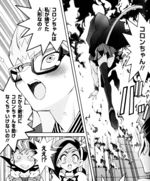 Cathy tries to save Cologne.

When Yuma defeated Cologne, the impact of his attack threw Cologne to inside the Doll House, which was in fire. At that time, Cathy dove into the flames and tries to save her, saying that she was the one who abandoned Cologne, and had to save her. Cathy's noble attitude makes shocked Yuma and Kotori. In her haste, Cathy mistakenly grabbed one of Cologne's dolls instead of Cologne. This time, Yuma decides to go save Cologne, but, who comes out of the Doll House carrying her in his arms is Grandpa Demetto. Cologne's soul was supposed to leave her body, but Demetto gave her his own soul, which allowed her to keep alive. While he sends Cologne out of the fire towards Yuma, he is engulfed by the flames together with the field.

Cologne mourns the death of Demetto, who she loved. As she had nowhere to go now, Yuma invites her to live with him in his house. Cologne asks him why he is doing that, and he answers saying that everybody that Duels him becomes his friend. Cologne accepts Yuma's invitation, becoming friends with him and the rest of the gang.[9]

Cathy and the Numbers Club in their new outfits.

Later, Yuma and the members of the Numbers Club gather in Cathy's house. Everyone get impressed at her mansion. Astral comments that it is much better than Yuma's house. Cathy then tells Yuma that if he marries her, all that would be his, and Kotori doesn't believe she said that and yells at her. Cathy apologizes to Cologne, and tells her that she can live there if she wants to. However, she just turns around and says that she likes Yuma's house better, and that she prefers love to money. Tetsuo then asks Cathy what she wanted to show them. She then presses a cat paw-like button, which opens a door leading to a big room, with many researchers and big computers. Cathy explains that as an apology for the trouble she caused, the Numbers Club's headquarters would be established there, where they can look up mysterious phenomena happening throughout the world, and therefore, locate the "Numbers". While the guys get amazed on the technology and say how Cathy is really put into it, Kotori sarcastically says Cathy is letting her money do the talking, while she replies asking if Kotori could do that.[10] The Numbers Club then start helping Yuma, wearing new super hero-like outfits.[11]