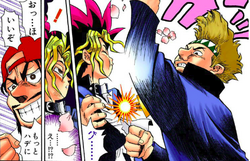 Fujita attacking Yugi for the documentary.

Caught on Camera: School Violence was a staged documentary on bullying by ZTV for Survival Morning in the Yu-Gi-Oh! manga. It abused innocent people for the sake of good ratings.

The director chose Yugi Mutou to play the role of the victim, after seeing how wimpy he looked. He showed his assistant, Fujita, a photo of Yugi and instructed him to get a school jacket, pose as a student and beat-up Yugi in front of the cameras behind the gym. Although Fujita didn't like the idea, he didn't want to lose his job; as a result, he agreed to do it.

Fujita stole a jacket from the school locker room and showed other students the photo of Yugi, to find out his name. He overheard Yugi and Katsuya Jonouchi talking about a rumor of a star being at the school. When Yugi was alone, he told him that he knew who the star was and arranged a chance for Yugi to meet them behind the gym.

Afterwards, Dark Yugi confronted the director and defeated him in the dice game Shadow Game, inflicting the Mosaic Illusion Penalty Game on him.