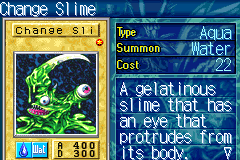 Two copies of "Change Slime" are included in the Initial Trunk.

"Change Slime" can be purchased in the shop.

The following characters use "Change Slime" in their Deck.

See Change Slime § In other media
Retrieved from "https://yugipedia.com/index.php?title=Change_Slime_(ROD)&oldid=4134333"
Categories: