Chazz Princeton is a video game depiction of Chazz Princeton, a character from the Yu-Gi-Oh! GX anime. He is available in Yu-Gi-Oh! Duel Arena as a Legend Partner, with a default of 6 Rental Points. His partner ID is P006.

A former Elite Student at "Duel Academy". He left after being defeated by Jaden, but returns as "The Chazz." Just like Jaden, he has the power to see the spirit of the cards.

A Deck featuring a mixture of "Armed Dragon" and "Ojama" cards. Use the effects of cards like"Masked Dragon" [sic] and "Level Up!" to Level up "Armed Dragon LV3". "Ojama" should lurk in the Graveyard for a chance to strike! 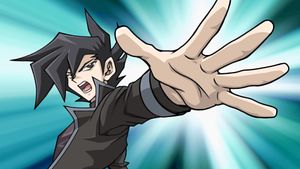 The likely inspiration for this character's pose.
Retrieved from "https://yugipedia.com/index.php?title=Chazz_Princeton_(Duel_Arena)&oldid=2684329"
Categories:
Hidden categories: