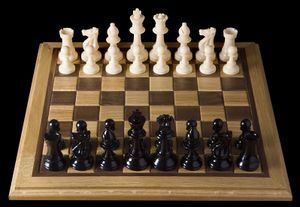 A chessboard set up.

Chess is a board game played between two players. The game is played on an 8x8 checkered grid. Players are able to capture opposing pieces and win by forcing their opponent's King into a position where it is attacked and cannot escape, capture the attacking piece or block the attack. The pieces in this game have based some Archfiends:

Also, the support card "Checkmate" is named after the winning move in chess.

In the Yu-Gi-Oh! universe, Seto and Mokuba often played chess at their orphanage. Gozaburo Kaiba was a chess grandmaster. Seto challenged him to a game of chess, where if Seto won, Gozaburo would have to adopt Seto and Mokuba. In the manga, Seto won the game by cheating.[1] In the anime, Seto won because he had studied Gozaburo's strategies.[2]

In the Japanese anime when Kaiba was sent to an illusion of a war-struck city, Aaron offered to play a game of chess by etching the board in soil and using empty weapon cartridges as pieces. However they were interrupted as the area was bombed.[3]

In Yu-Gi-Oh! R, Reiko Kitamori uses chess-themed "Puppet" monsters. A number of the "Archfiend" series are also based on chess pieces. Both sets of cards have support cards based on different chess moves and positions.

The game Capsule Monster Chess is partly based on chess.