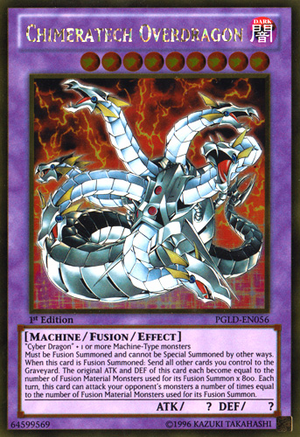 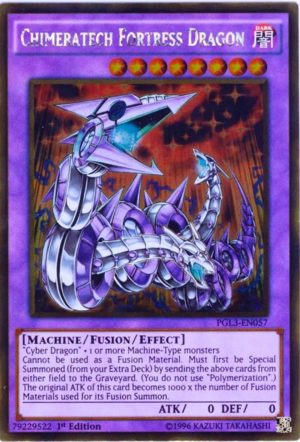 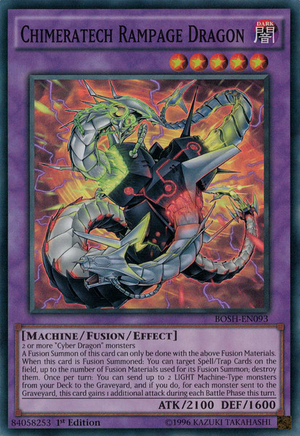 Chimeratech OTK Decks are based on bringing out the monster of its namesake and winning that exact turn, to accomplish this players would wait to get "Heavy Storm" to clear the field of Spell and Trap Cards that would hinder the summoning of "Chimeratech Overdragon". This is extremely crucial; if the summon or attack fails you won't have any monsters left in your deck. After that a player would play "Future Fusion" and send at least one "Cyber Dragon" from the deck to the graveyard along with the rest of the Machine-type Monster cards in the deck, followed by "Overload Fusion" to Special Summon a monster whose attack almost always exceeded 8,000 ATK and win after hitting a face-up attack position monster on the opponent's side of the field. The deck was considerably broken and proved to be very powerful, winning several Shonen Jump Championships as well as multiple Top 8's. In early 2007 the deck became very hard to play as "Overload Fusion" and "Future Fusion", the cards that enabled the player to easily summon "Chimeratech Overdragon", were limited. In the March 2011 lists "Overload Fusion" became Semi-Limited. Seeing as there are very little cards that effectively give the player a chance to look for a Spell Card from the deck this type of deck is now consider too slow to be played and relies more on the luck to get "Overload Fusion" with "Future Fusion" than actually having a strategy.

This OTK can be used in conjunction with Ancient Gear decks. Since all Ancient Gears are Machine-type monsters, they can be used in the Fusion Summon and you can also use "Ancient Gear Drill" to search for "Overload Fusion" or "Future Fusion" which would speed this deck. Another way to speed things up is to use "Gold Sarcophagus" to search for "Overload Fusion" or "Future Fusion". For a slower version of the OTK would be to use "Chain Material" to remove from play all of the Machine-type monsters in your deck, hand, graveyard, and field to Fusion Summon "Chimeratech Overdragon" with at least 8000 ATK depending on how many you have in your deck. Unfortunately, the Special Summoned "Chimeratech Overdragon" cannot attack and it will be destroyed at the end phase of the turn.

A potential strategy is to activate "Ojama Trio" and "Final Attack Orders". This will allow for a Chimeratech OTK using only three monsters in the Fusion Summon. You can also summon a 16000+ "Chimeratech" and use "Catapult Turtle" to offer it as a Tribute and win the Duel if it cannot attack due to another card ("Chain Material", "Shadow Spell", "Spellbinding Circle", etc.).

Be careful not to load your deck up with only Machine-type monsters and use them all for "Chimeratech Overdragon" by using "Future Fusion" (Traditional Format only) because your opponent could activate "Last Turn" or other cards that can destroy it ("Mirror Force", "Torrential Tribute", "Bottomless Trap Hole", etc.) and you will be left with no monsters left in your deck to Summon, and the duel will be lost.