From Yugipedia
Jump to: navigation, search
For other versions of this character, see Chumley Huffington (disambiguation).

Chumley Huffington, known in Japan as Hayato Maeda ( Maeda Hayato), was initially a Slifer Red Duelist with an extremely pessimistic outlook but gradually grows to become a respected card designer for Industrial Illusions. 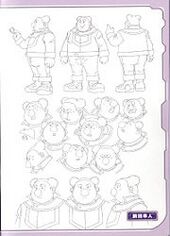 Chumley's design incorporates multiple layers of clothing and a wide range of expressions. Depicted here is the Duelist in full Slifer Red regalia from front, side, and rear alongside views of his head from different angles.

Chumley's character design was overseen by Kenichi Hara. His usual outfit consists of the standard Slifer Red uniform, though its colors are inverted to include a larger section of white than red. His face, build, and hairstyle were made to resemble a koala. As conceived, the character was very muscular, but his muscle tone is removed from the dub to make him appear obese. He carries an Duel Academy-issued Duel Disk on his left hand.

Chumley is portrayed as a lazy and gluttonous Duelist who could never win a Duel and hated exercising. Though a loyal friend, he was never really into putting himself into any danger, being a very reluctant participant. However, he would prefer his friends over any amount of grilled cheeses. He eventually turns from a lazy flunky to a respected card designer working with Maximillion Pegasus. 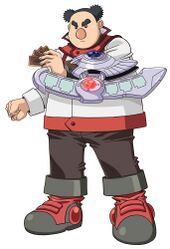 In the dub, Chumley is obsessed with grilled cheese sandwiches. It is said at one point he creates a Grilled Cheese Spell Card. His obsession with the food leads him to use phrases such as "lischus" and "not lischus" as positive and negative assurance respectively, the words being derived from "delicious."

In one episode, it is implied that he speaks French.

Chumley has the same power to hear and see Duel Spirits that Chazz Princeton and Jaden Yuki have, although he is not totally aware of it. His Spirit Partner is "Des Koala" and he is pictured with it several times.

Chumley was forced to retake his freshman year after he failed his first time around. His best friends, Jaden Yuki and Syrus Truesdale, come to Duel Academy, and encourage Chumley to gain more confidence in himself.

Throughout the series, Chumley participates in only two Duels: the first against his father, Mr. Huffington[3], and the second against Dr. Crowler.[4] His father believed that his son's efforts at Duel Academy were wasted and that he would be better off leaving. To put an end to the conflict, Chumley struggled valiantly against his father's special tactics, but ultimately lost. Despite this, he allowed his son to continue his studies, as he saw that Chumley had actually learned something, and that his friends would always support him.[3] 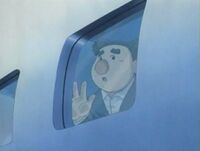 Maximillion Pegasus offers Chumley a job at Industrial Illusions as a card designer nearing the end of the first year after he wins a card-design contest by creating "Ayers Rock Sunrise". In order to determine whether or not he will be permitted to leave the school, Crowler Duels with him in one final test. Although Chumley manages to hold his own, even getting the chance to play the first card of his own creation, "Ayers Rock Sunrise", he is again defeated. Crowler, however, lets him move on regardless, impressed by how far in his studies he has come.[4]

Chumley returns with Pegasus during the Genex Tournament to give Jaden a new card, "Skyscraper 2 - Hero City", to aid him in his Duel with Franz, a fellow card designer who stole the only remaining copy of "The Winged Dragon of Ra" from Industrial Illusions.[5]

Chumley, along with Belowski, is shown during Honest's flashback of Professor Banner's class in episode 176.[6]

Chumley uses an Australian Deck[3], sporting cards such as "Des Koala", "Des Kangaroo", and "Eucalyptus Mole", all of which reflect his affinity toward such animals, including his favorite card, "Big Koala". His strongest monster, "Master of Oz", and one of its fusion components, the aforementioned "Des Kangaroo", were given to him by his best friends Jaden Yuki and Syrus Truesdale respectively.