The player meets Chumley upon first arriving to the island. He will refuse to duel the player until after he is randomly found around the island, then meeting him in the Forest around the Red Dorm, and ultimately dueling him at the Beach some days after defeating the Paradox Brothers. 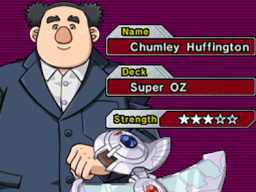 Chumley's appearance after he begins working at Industrial Illusions.

A few days after the Shadow Riders are defeated, Chumley will drop out of Duel Academy to begin working at Industrial Illusions. After talking to Syrus at the Beach, Chumley returns during any Sunday in which the boat visits the island, which happens every time the player scores a total of 10 points in the weekly examination tests. He needs to appear at least once to advance the storyline.

Chumley can give the player 1 copy of any of the following cards each time he is defeated.

Defeating Chumley multiple times after he begins working at Industrial Illusions can earn the player a Suit.

Lishus that we registered as duelists. I'm gonna learn what it takes to have a duelist's heart.

I want to learn

I'm glad I could register you as a duelist. From now on, I want to continue learning and understanding what it is to be a duelist.

Subject: Thanks for Everything

Every time I duel you, I feel foolish that I wasted a year being afraid to duel. You're as awesome as a grilled cheese sandwich!

When I duel you, I remember how silly it was of me to be afraid of dueling at all. Thank you for all those enjoyable duels.