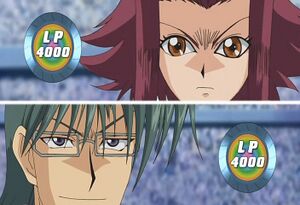 As a member of Iliaster and a Dueling Assassin, Commander Koda was placed in the Fortune Cup to expose the Signers. In his first match, he was paired up against fellow Iliaster member Professor Frank; as per Rex Goodwin's instructions, Frank allowed Koda to defeat him in order to face Luna during the consolation game. As a result, Koda advanced to the semifinals to duel Akiza Izinski.

Prior to the match, Koda gathered data about Akiza to tailor his Deck against her. Lazar arrived to get him ready for his Duel and reiterate it was Koda's job to expose Akiza's identity as a Signer - in turn, Koda replied that he wanted five times his usual pay.

During the Duel, Koda attempted to rile up Akiza by revealing parts of her past she didn't particularly enjoy. (In the dub, Koda was an upperclassman when Akiza first enrolled in Duel Academy, where she viciously beat him both in a Duel in which she used her psychic powers.) As the Duel progressed, Koda became increasingly worried, due to the extensive damage Akiza had done to his body via her Psychic Dueling. Eventually, he stopped caring about his mission or being paid, trying his hardest just to survive.

Shortly before being defeated, he triggered Akiza's rage by calling her a monster who was abandoned by her parents, causing her power limiter to fall out. Receiving the full brunt of her powers, Koda was violently defeated and knocked unconscious. It's unknown if he survived.

Koda in the manga.

In the manga, Koda was a contestant in the D1GP, and managed to advance to the second stage of the tournament.[1] However, he later seemed to have passed by the Duel Dragon blank card, and was defeated by his dark counterpart created by it.[2]

An omake from the tankōbon volume 4 revealed that Koda Dueled against Jean and lost, with Jean obtaining the Level 1 Star Ticket.

Koda plays a Profile Deck, which focuses on the mentality of his opponent. By researching information about his opponent, his Deck changes to match against theirs, similar to how Bastion Misawa builds his Decks. During his Duel against Akiza, many of his cards are based on gaining Life Points or dealing Burn damage, making it so he rarely has to actually battle. He also employs cards themed around guessing and knowing what his opponent will play before they play it.