Consumed by Light: Sartorius Emerges is an event in Yu-Gi-Oh! Duel Links. 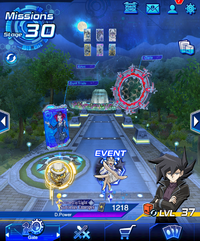 Duel World (GX) during the event.

At first, Sartorius will only be able to be challenged at the Gate at Level 10. To challenge him at higher Levels (up to Level 40), the player needs to defeat him at least once at the highest available Level (e.g. he needs to be defeated at Level 10 before he can be challenged at Level 20). In order to challenge Sartorius at a certain Level, the player needs to spend a corresponding amount of Tarot Cards, which is as follows: 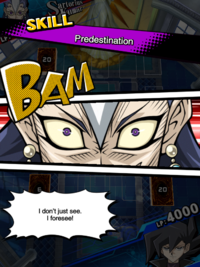 This version of Sartorius uses a different Deck and the Skill "Predestination", which makes his coin tosses land on Heads. In addition, a special item called "Mastery of Destiny" is made available in the Card Trader EX shop, which forces all of his coin tosses to land on Tails.

He can be spawned by accumulating Destiny Power. This can be achieved by dueling in both Duel World and Ranked Duels. By Dueling him, the player has an increased chance of getting Rainbow Packs.

When challenged, the player can choose to Duel him at Level 20 or Level 40, which grants an additional 2000 or 4000 Duel Assessment, respectively. When challenged for the first time, only the Level 20 version is available, and must be defeated to unlock the Level 40 version. By defeating Prophetic Sartorius Level 20 for the first, the player is awarded with Card Sleeves: Tarot Card, and by defeating Level 40 for the first time, they're awarded with Game Mat: Tarot Card.

After March 29, 2019, Prophetic Sartorius could be challenged at Level 60. He uses a Deck with "Tour of Doom" which, combined with his "Predestination" Skill, prevents the player from Normal Summoning or Setting monsters during their own turn. By defeating Level 60 for the first time, the player is awarded with an Icon.

These cards can be obtained by Dueling Sartorius Kumar.

After July 11, 2019 (March 27, 2019 during the first run) the item Mastery of Destiny was made available for purchase. Unlike other items, it can be purchased any number of times.