Crying Mask is a character appearing in the Yu-Gi-Oh! D Team ZEXAL manga. He is a member of Team lswarm, who enters the Team Duel Tournament.

When Team ZEXAL entered the Heartland Theme Park Horror Tower, Crying Mask and his team appeared before them as flying masks. Then, they introduced themselves, and the upper mask transformed into Laughter, who introduces himself. The match then began with Laughter's and Yuma's Duel. 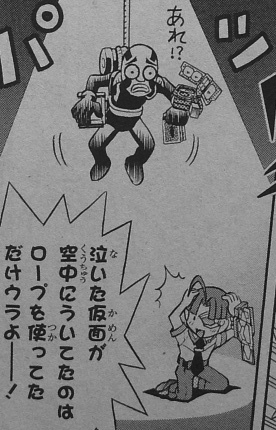 Crying Mask used a trick to make it look like he was just a flying mask. While using this trick to scare Takashi, he reduced his Life Points to 500. However, when Tokunosuke uncovered the trick, Takashi was finally able to Duel for real, defeating Crying Mask.[1]

No cards of Crying Mask's Deck were shown, so it is unknown which kind of Deck he runs.