Sapphire Pegasus appears as one of Jesse Anderson's Duel Monster Spirits. At one point, he was imprisoned by Trapper, but Jesse ultimately freed him. When Duel Academy was transported into an alternate dimension, he fought the spirit of "Harpie Lady" and later her sisters. Later, Yubel possessed Jesse and trapped all the Crystal Beasts into their darker versions, but they were able to be freed after they could contact Jaden with help of Winged Kuriboh. He made a reappearance when Jaden was freed from Sartorius' curse, telling him that Jesse can't be affected by Nightshroud's powers too. 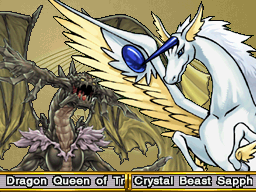 Sapphire Pegasus in Over the Nexus.