Cup Ramen Man is a virtual character in Yu-Gi-Oh! 5D's. He appears in the Accel Simulator arcade game, where the player must defeat him in Duel Puzzles.[1]

This oversized Cup Ramen is used by Jack Atlas in an attempt to lure and capture Lazar. Jack and the rest of Team 5D's put on a Red Demon's Noodle promotion. Since he lost a game of jyanken, Crow Hogan was forced to dress up as Cup Ramen Man for the event. If someone could defeat him in a Duel, they were said to get a free year's supple of Red Demon's Noodle. Crow defeated a number of opponents until Lazar arrived to challenge him. Crow removed the giant cup and trapped Lazar inside it. However, Lazar threw a smoke bomb and made his escape, but not before Yusei threw a tracer on him.[2]

After Lazar told Team 5D's and Sherry LeBlanc what he knew about Iliaster, he took them to the Accel Simulator at Game Paradise. The players were given 3 credits and would lose 1 for every failed attempt. By clearing two Duel Puzzles, they would be able to access hidden data, including the identity of a company related to Iliaster. They faced Cup Ramen Man in the puzzles. Cup Ramen Man teased the players as they failed the puzzles. Lazar tried and failed to pass the first puzzle, but Akiza cleared it. Jack tried and failed to pass the second puzzle. With 1 credit left, Yusei took over and cleared it. Cup Ramen Man fell from his Duel Runner yelling "This should have ended in China!".[1] 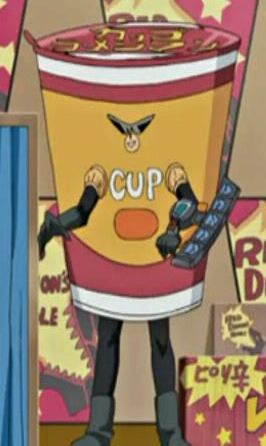 Cup Ramen Man plays a ramen-themed Deck, which centers around triggering his monsters' effects when they are destroyed to destroy his opponent's cards. Only three of his cards were seen in the Accel Simulator game