Cyber End Dragon is part of the Cyber Legacy and considered the opposite to the Underworld Cyberdark series. Its spirit could communicate with others through a banner of it, hung in Chancellor Sheppard's dojo.

After Zane Truesdale proved to be a powerful duelist, Sheppard awarded him the "Cyber End Dragon" card.

Zane betrayed Cyber End Dragon in order to get the "Cyberdark" cards, by allowing it to get destroyed in his Duel with Sheppard in order to win. 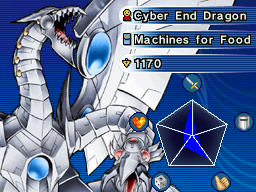 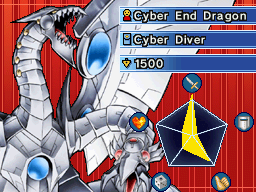 Cyber End Dragon can be found in the Chaos Duel World. Defeating it 5 times unlocks Cyberdark Dragon as an opponent. 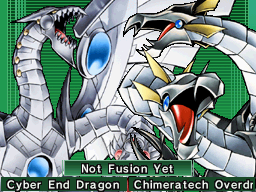 Cyber End Dragon appears as a Tag Duel opponent, partnered with Chimeratech Overdragon as the Not Fusion Yet Tag Team. They are unlocked if the player controls a monster with at least 20,000 ATK at any point in the game.