D.D. Castle: Supreme King Rises! is an event that occurred in Yu-Gi-Oh! Duel Links, loosely based on Axel Brodie's infiltration of the Supreme King's Castle and final confrontation with the Supreme King in episodes 142 and 143. It allows the player to unlock Supreme King Jaden as a playable character. 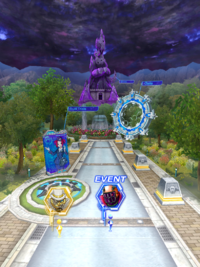 Duel World (GX) during the event.

Castle Keys are earned by Dueling in Duel World (except at the Gate or against The Vagrant), with more awarded for winning the Duel. Each day, the player is awarded 15 Castle Keys for entering the D.D. Castle area. Castle Keys are also available from Event Missions that require playing in Ranked Duels.

The player must use Castle Keys in order to challenge the enemies in each floor. However, the player can Duel on challenge floors at no cost until they clear the floor for the first time.

In Wave Duels, each opponent is weak to a specific Attribute, resulting in any battle damage inflicted to the opponent from monsters of that Attribute becoming tripled.

The weaknesses of each Attribute are listed below.

There are several Skills and cards that cannot be used in Wave Duels.

At the start of each wave, one or more monsters appear on the opponent's field in Attack Position. On standard floors, this is always one copy of the monster that is serving as the opponent.

If a player fails to complete a floor by ending a Duel with a loss or a DRAW, they will still receive the standard completion reward but halved (rounded down to the nearest whole number).

If an eligible floor is completed within 10 turns, a Challenge Room will become visible directly beneath that floor, permanently. Challenge Rooms are identical in appearance to any other floor, except that they often offer an exclusive opponent(s) and more desirable rewards. Challenge Rooms have no entry cost until they are cleared for the first time.

At some point during this event, Castle Scouts begin to "emerge" from the D.D. Castle. As a result, they randomly appear in Duel World (GX) and players are able to challenge them in return for Lottery Coins and Castle Keys.

There is no Castle Key cost to Duel Castle Scouts.

Rewards can be earned by completing floors of the D.D. Castle for the first time (for that specific iteration of this event).

Lottery Coins are also rewarded for completing a floor for the first time.

The Card Trader EX appears during this event and remained open until one week after its conclusion. The player can trade their EX Jewels for cards, Booster Items, Gold, and Skill Chips. Each card and Booster Item can only be obtained once from the Card Trader EX during this event, but the Gold can be obtained any number of times. When purchasing one of the latter, the player can chose how many copies they wish to exchange.

The player can spend a multiple of 30 Lottery Coins (max. 300 at a time) to obtain one random reward for each 30 Lottery Coins spent. The Lottery remained available after the event's conclusion, and could be accessed from the "Information" menu.

King of the Skull Servants[edit]

Vennominon the King of Poisonous Snakes[edit]

Behemoth the King of All Animals[edit]

Yellow Baboon, Archer of the Forest[edit]

Green Baboon, Defender of the Forest[edit]