Construction of the bridge had been halted by Sector Security for a while. The incomplete bridge still existed as a monument associated with a legend to residents of Satellite.

With the defeat of the Dark Signers, the bridge was finished as there was no longer any need to separate the two cities.

Daedalus Bridge itself is one of the ruined structures which composes the Divine Temple. 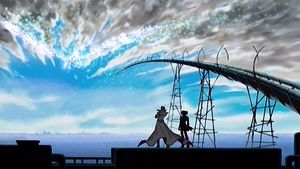 The people of Satellite lived in poverty and worked for the richer New Domino City. The Satellite residents were not allowed to cross into the city. Rex Goodwin came to a coastal part of Satellite, where the bridge currently stands, on a Duel Runner. Nobody living there knew who he was. Every day Rex used to stare across the waters dividing Satellite and New Domino. One day he stopped staring, as he realized what he must do and began building a bridge to the city.

People thought he was crazy at first, but after seeing his progress and determination, they began to help him as they hoped for a better future in the city.

Some people frowned at the idea and forced construction to halt. Goodwin became wanted by Sector Security. The helpers gave up, figuring it would be hopeless once the man was captured. Eventually Goodwin was cornered by Security. Rather than be caught and spend the rest of his life in jail, he rode his Duel Runner along the bridge and flew off to the other side of the sea.

Those involved never knew what happened to the man after he took off the bridge. They didn't even know if he survived or not, but he became a legend and the Duel Runner became a symbol for freedom amongst the residents of Satellite. 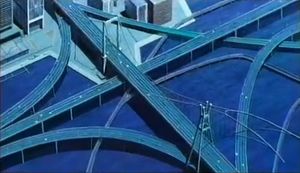 Daedalus Bridge from the city side

Before the final battle between the Signers and the Dark Signers takes place, Yusei requests Rex Goodwin to promise to finish the bridge once the Dark Signers are defeated, as there would no longer be any need to separate the two cities.

Rex Goodwin dies as one of the Dark Signers, but the bridge is finished regardless sometime after his death. The completed version consisted of a much more modern bridge, connecting the two cities. The old incomplete was leftinside where the bridge splits in two as a monument. 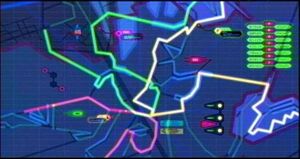 A highway which connects all of New Domino itself was also built. Even with very short notice, Turbo Duelists can request to use parts of the bridge for Turbo Duels. After gaining permission, Sector Security closes off some of the roads and sets up a Turbo Duel circuit.

When the Divine Temple appeared over the city, Team Ragnarok planned to build a route towards the Temple using the Daedalus Bridge as a starting point so Team 5D's could reach it. While waiting for the route to appear Yusei reflected about how Goodwin jumped off the bridge and how he was about to do the same.

The bridge is named after Daedalus from Greek mythology, who was able to fly using artifical wings, similar to how Rex Goodwin flew using his Duel Runner.

The story became a legend often told to younger children in Satellite. The man who began the construction of the bridge is regarded as a hero and his Duel Runner symbolizes freedom.

Crow has told the story many times to children living in the area near the bridge and has even added wings to his Duel Runner, Blackbird, inspired by the story.

Yusei Fudo's friends have compared him to the man from the story. Blister has even considered that Yusei's Mark of the Dragon carries the wishes of the man. Now that Crow has Yusei's Tail mark it could be considered that what Blister said was true.

Due to the completion of the bridge, all barriers that once existed between Satellite and New Domino City have disappeared.