Damas (ダマス) is a character in the Yu-Gi-Oh! GO RUSH!! anime. He is a Chapeau Alien, a type of parasitic alien that lives on the heads of humanoid aliens, who when with his partner Nomura takes on the identity of a prophet called Nomuratodamas (ノムラトダマス). 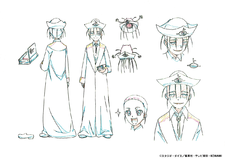 Lineart of Nomuratodamas depicting them from different angles.

The alias "Nomuratodamas" that he and his partner took is a reference to the astrologer Michel de Nostredame, better-known with his Latinised name "Nostradamus", who was infamous for his alleged prophecy of the end of the world. The alias is also a portmanteau of "Nomura to Damas" (Nomura and Damas).

Damas doesn't Duel, and instead announces predictions about what will happen in the future of the Duel.