Dandylion is a character version of the card "Dandylion". 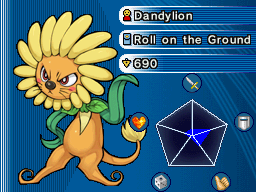 Dandylion is a Level 2 Limited Duel opponent, challenging the player to defeat it using a Deck that has no monsters that are not EARTH.

Dandylion appears as a Tag Duel opponent, teamed up with Obelisk the Tormentor. Their Tag Team, Lo and Behold, is unlocked by defeating the Tag Team "Protect & Burn" 3 times.