Dark Yugi is the Yu-Gi-Oh! Toei anime version of the character Dark Yugi, also romanized as Yami Yugi. The Toei anime is based on volumes 1 to 7 of the manga series.

Dark Yugi is a spirit who resided within the Millennium Puzzle. When Yugi completed the puzzle, Dark Yugi took up Yugi's body as a host. Occasionally he takes control of Yugi's body to defend him and his friends from bullies and dangerous people by challenging them to dangerous Dark Games. His existence is initially unknown to Yugi, who mistakenly credits memory loss to Dark Yugi's periods of control. Yugi and his friends later learn of Dark Yugi's existence.

According to other series, Dark Yugi is the soul of Pharaoh Atem, stripped of memories and sealed in the Millennium Puzzle. However details of this version of Dark Yugi's past are not explored because this series was canceled.

Dark Yugi's appearance is more maniacal than his later appearance in the NAS anime. Compared to Yugi, Dark Yugi's voice is deeper and more confident, his fringe is less stiff and his eyes are red, rather than purple. On transformation to Dark Yugi, Yugi's form zoomed into a shadow of Dark Yugi, with glowing eyes and the Eye of Anubis on his forehead.

Dark Yugi shares several personality traits with Yugi, mainly his strong bond with his friends, as he always comes out to protect them whenever there's trouble. He chooses to keep his existence a secret from everyone including his own host, however when he was finally found out he revealed himself with little hesitation.

Dark Yugi comes of confident and cool minded. In Dark Games, he frequently plays around with his opponents and usually lets them think they're taking the lead only to then outsmart them. However he can lose his composure when the Dark Game isn't under his control, this usually happens when he's not the one who starts the game.

Though his intentions are noble, Dark Yugi is rather aggresive and malevolent against his victims during Dark Games, punishing them with harsh Penalty Games that usually leave them traumatized and/or injured. In some cases, the Penalty Games Dark Yugi inflicts can be even more cruel than whatever his opponent was doing to Yugi and his friends. Despite this, he doesn't seem to inflict Penalty Games unless he feels it's necessary, and in one case he even saved Mokuba from Kaiba's artificial Penalty Game. 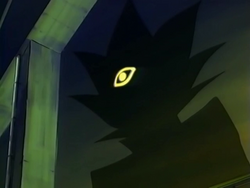 Yugi's shadow as Dark Yugi takes control of his body for the first time.

Yugi Muto solved most of the Millennium Puzzle while he was under the pressure of coming up with money to pay Ushio, for his self imposed body guard fees. However he was beaten-up by Ushio as he searched for a missing piece. Katsuya Jonouchi returned the last piece to Yugi, as he tried fighting Ushio off. Barely conscious, Yugi finished the Millennium Puzzle and his body became host to Dark Yugi.[1]

Dark Yugi confronted Ushio and challenged him to a Shadow Game. A deck of cards, which Dark Yugi pretended was the money, was placed on top of a dome and both players hung freely from a rope over around the spike at the top of the dome. Lined on the dome alongside between the two players was a row of cards. How they advanced to the top was dictated by what card they turned over. Ushio attempted to cheat, earning him a Penalty Game, where he imagined he fell into a pit of monsters.[1] 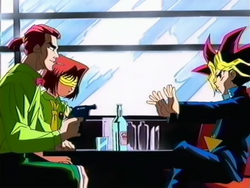 When Anzu Mazaki was held captive by the escaped convict, Jiro the Jorogumo, armed with a gun at Burger World, Yugi was forced to serve Jiro cigarettes and vodka. Dark Yugi took control and challenged Jiro to a game. With Anzu blindfolded she couldn't see who was challenging Jiro; It sounded like Yugi's voice, but was too confident and daring to be Yugi. Playing a Shadow Game, where each player can only move one of their ten fingers, Jiro chose his index finger that pulls his gun's trigger and Dark Yugi chose his thumb to light the cigarette lighter. Dark Yugi lit the convicts cigarette but then dropped the lighter onto the convicts hand while it is pouring a 90% alcohol drink into his glass that has overflowed onto Jiro's body. Should Jiro pull the trigger, the recoil of the gun would tip over the lighter and set him alight. Jiro cheated by putting down the gun and removing the lighter, so Dark Yugi inflicted a Penalty Game, where Jiro believed he was set on fire.[2]

Shotaro Akaboshi stole a watch Honda had bought for Miho Nosaka. Dark Yugi met up with him later and played a Shadow Game, where each player tried to stop the watch after it activated closest to 10 seconds, after 10 seconds a pendulum would pass and should the player be too slow their hand would be cut off. Shotaro lost but still attempts to take the watch after he lost and was given a Penalty Game, where he imagined his body became made of clockwork parts.[3]

During the Digital Pet Duel after Haiyama attacked Yugi and his friends and tried turning Honda into his pet, Dark Yugi connected Yugi's Digital Pet, U2 with Haiyama's. The game became a Shadow Game and the pets appeared as real beings. Using data it incorporated from a connection with Jonouchi's pet, U2 upgraded form like Dark Yugi and was able to defeat Haiyama's pet. Haiyama started whipping his pet, telling it to get up. For Haiyama's Penalty Game, he imagined the pet turning on him and eating him.[4]

Mayumi had left a puzzle love letter for Jonouchi under his desk. This results in Ms. Chono setting Anzu up to face expulsion. For her cruel intentions, Dark Yugi plays a Shadow Game with Ms. Chono, where they assemble smashed mirrors while blindfolded. Ms. Chono cheats and Dark Yugi inflicts a Penalty Game on her, making her make-up peel away, revealing her true ugly face.[5]

Warashibe, who was obsessed with Miho, forced her into a game of Capsule Monster Chess. After realizing Warashibe cheated by using a rigged dispenser, Yugi and Miho try to leave, but Warashibe traps them by dropping a portcullis, which breaks and falls on Yugi and Miho. Dark Yugi emerges and finishes the game, winning it. Warashibe receives a Penalty Game, where he imagines himself being trapped inside a giant Capsule Monster Chess capsule.[6]

When Miho enters a popularity contest at school, a girl obsessed with her beauty tears Miho's swimsuit and dress, Dark Yugi challenges her to a Shadow Game involving pulling her flowers and whoever pulled the last loses. Her victory seemed inevitable with one flower left and it being Dark Yugi's pull, but Dark Yugi pulled the one from her hair leaving the true last one for her. She is given a Penalty Game, showing herself as an old person. Later she dunks herself with water and is upset and withdrawn from the competition.

Dark Yugi does not appear during most of Death-T, but comes in right before Yugi battles Mokuba Kaiba in Capsule Monster Chess. And then beats Kaiba in Duel Monsters for a final time. 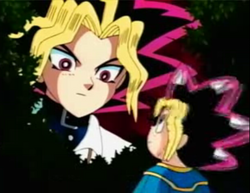 Yugi and Dark Yugi meet for the first time.

Dark Yugi appeared when Dark Bakura trapped Yugi and his friends' souls in Monster World figures while they were playing a Shadow Game, at the same time Yugi and Dark Yugi finally meet in person. Dark Yugi played for all of them against Dark Bakura. Dark Yugi quickly noticed that Bakura is using dice-rolling techniques to get a lot of advantage so he did the same, forcing Dark Bakura to agree to ban using such techniques.

Dark Bakura began cheating using Mind Dice that always roll the numbers he wants. When his avatar Dark Master Zorc was damaged, Ryo Bakura took control of his left arm and started hindering Dark Bakura's playing, allowing Dark Yugi's side to take the upper hand. Dark Yugi noticed it and used Yugi's ability to take control of opponents to rescue Bakura, adding another player to their side and further weakening Zorc.

When Zorc was about to be defeated, Dark Bakura made a final attempt to win by destroying Zorc which would also destroy the rest of the players, resulting in his victory. Bakura, Yugi and his friends ruined his plan by destroying the Mind Dice which allowed Dark Yugi to defeat Zorc and Dark Bakura.

The next day Bakura showed his friends a diorama of the events that happened, which included Dark Yugi.