It is based on the game Paper Crash! from the manga.

Kokurano claimed to be able to see the future. However, he would write as many predictions as possible down, hence increasing the probability of a small amount being correct and would only reveal the ones that came true afterwards and claim to have known they were going to happen all along. He also made his spoken predictions come true.

He predicted that a wonderful man would reveal himself to Anzu and she would swoon before him in love. For Yugi's skepticism, he predicted that countless letters would fall and bring disaster on Yugi. He later pushed a bookcase on Yugi on the library to make this come true. However Yugi switched to Dark Yugi, who realized what Kokurano was doing, and searched for Anzu.

To make his prediction about Anzu come true, Kokurano used chloroform to make her swoon. Dark Yugi then confronted Kokurano and challenged him to the Shadow Game. 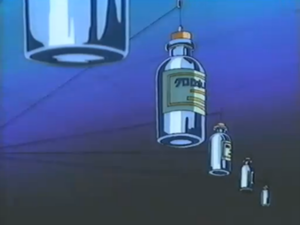 The bottles hanging from the ceiling.

While Dark Yugi carried the sleeping Anzu, she partly woke up long enough to see a cut on her rescuer's hand. Later she saw the same cut on Yugi's hand and wondered if it could have been him that saved her.