Mokuba sought to get revenge on Dark Yugi for the Penalty Game he inflicted on Seto Kaiba after a game of Duel Monsters.

Mokuba got Old Man Dentures to rig his Capsule Monster Chess coin machine. Mokuba and his gang later arrived at Old Man Dentures' store to meet Yugi at the coin machine. After introducing himself as Seto Kaiba's brother, he got his followers seize Yugi to force him into a game. They proceeded to take Dentures coin machine. Dentures acted mad at first, but allowed them to carry on after Mokuba dropped a large amount of money in front of him.

The gang took Yugi and the dispenser to their hideout, where he had to play Capsule Monster Chess against Mokuba. As Mokuba hoped, Yugi changed to Dark Yugi for the game. 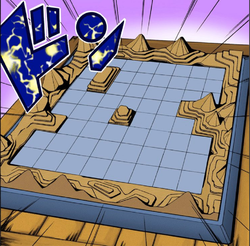 They used Battlefield 7: Crisis Hill for the game. Mokuba claimed that he does best on this field.

The rigged dispenser gave Yugi mostly low Level monsters and Mokuba mostly high Level ones. They accepted the stakes that if Mokuba won, he got to cut off one of Yugi's fingers and if Yugi won, Mokuba would have to play a Penalty Game.

He arranged them a checkered pattern.

He put "Torigun" on his left and the other four together in a square on his right.

Dark Yugi informed Mokuba that the game would be a Shadow Game.

Dark Yugi replied that he will meet him head on and moved "Eye Mouth" forward.

Mokuba called Dark Yugi stupid for coming at him with a low Level monsters and used "Gumbo" to slice "Eye Mouth" in two, defeating it.

Mokuba celebrated beating one of Dark Yugi's monsters, but was surprised to find Dark Yugi laughing too. When questioned about it, Dark Yugi replied that he shall teach Mokuba the rules of gaming; Rule number 1 is that you must act like you have the upper hand, no matter what the circumstances. Disgusted, Mokuba asked if Dark Yugi thought he could teach him. Yugi responded that "Stay cool at all times is rule number 2".

Dark Yugi got "The Great "Pa"" to attack "Cobrada". Being the same Level, both monsters were destroyed.

Mokuba got "Dinosaur Wing" to attack and destroy "Flower Man". 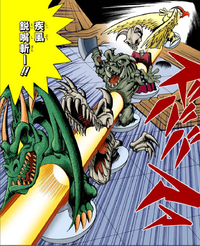 Mokuba laughed that Dark Yugi was down to 1 monster, while he still had 4. Dark Yugi laughed and diverted Mokuba's attention to the field, where Mokuba's monsters were lined up diagonally with Dark Yugi's last monster, "Torigun".

Dark Yugi got "Torigun" to use its special ability, "Whirlwind Razor Beak Slash", to destroy all monsters diagonally aligned with it, taking out Mokuba's remaining monsters. 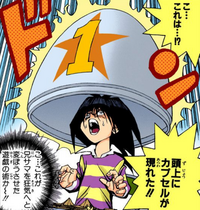 Dark Yugi declared that the final rule was "Hold your trump card till the end" and advises Mokuba to remember it well. He then inflicted a Penalty Game on Mokuba causing him to believe that a giant Capsule Monster Chess capsule had appeared over his head. Before he became fully engulfed in the capsule, Mokuba warned Dark Yugi that Seto's revenge project, Death-T was coming.

Dark Yugi said that Mokuba was not a match for him, Mokuba should think about that while trapped inside the capsule and can play him again later after learning the rules.