Dark ZEXAL (ダーク・ゼアル Dāku Zearu) is the dark counterpart of ZEXAL in the Yu-Gi-Oh! ZEXAL anime that combines both Yuma Tsukumo and Astral into one entity. Unlike all other ZEXAL forms, Astral is the only one in control. It grants its wielder the ability to use the Dark Draw to create "Dark ZEXAL Weapon" ("DZW -") monsters. 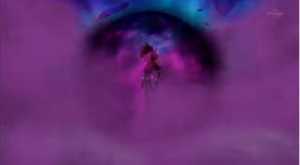 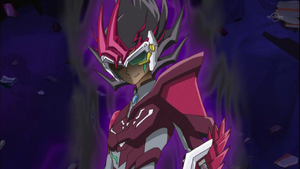 During Yuma and Astral's second rematch with Vector, the latter was able to manipulate the darkness inside Astral and stop their initial ZEXAL Morph. With Astral having lost faith in Yuma, the darkness within him spread through Astral and he forcefully initiated ZEXAL again, sending the both of them into a black hole, which resulted in Dark ZEXAL.[1] In this form, Yuma gains a darker appearance: dark brown skin, blue eyes, black hair, dark red armor, a purple aura surrounded by darkness, and a sharper bladed D-Pad. Unlike the original ZEXAL, Astral has complete control over Yuma's body. 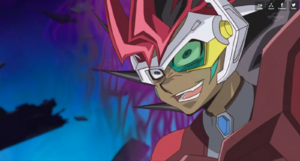 Under its corrosive influence, Astral Dueled aggressively, uncaring of the damage he took. Meanwhile, Yuma entered Astral's mind, intending to save him. Yuma found Astral's subconscious still in a state of corruption, believing that Yuma was no longer his friend and seems that he prefers of returning the favor. Yuma apologized profusely, saying that he was at fault and was sorry for what he had done, but Astral instead embraced the darkness, thanking Yuma for the power of evil; showing that Astral's personality had changed from benevolent and calm, to dark, psychotic, and crazed and he believed that his negative feelings would grant him even more power. 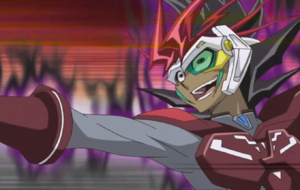 Begging him to stop and wouldn't see Astral being consumed any further, Yuma then ran towards Astral and embraced him, pushing both of them out of Astral's mind in the process. In the physical world, "Number C39: Utopia Ray V" attacked "Number 104: Masquerade" one last time with "Utopia Ray V" at 83200 ATK. At the same time, Dark ZEXAL was reversed, with Yuma and Astral splitting apart as the others watched.[2] 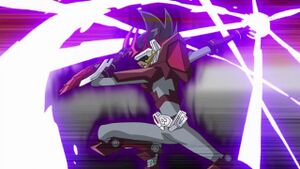 Dark ZEXAL allows Astral the ability to perform a Dark Draw therefore creating a "DZW -" monster that can be equipped to "Number C39: Utopia Ray V". "Chimera Clad" granted "Utopia Ray V" the ability to prevent itself from being destroyed in battle, as well as doubling its ATK and allowing it to attack again.[2]