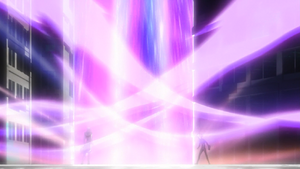 The Data Storm was rumored to be a wind that once blew inside LINK VRAINS, which Duelists used to conduct a special kind of Duel called "Speed Duel", although that wind had disappeared. However, after Playmaker obtained the powerful AI program Ai in his Duel Disk, the Ignis released Data Material back into LINK VRAINS, returning the Data Storm to that world. 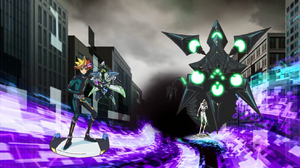 Playmaker initiated a Duel against a member of the Knights of Hanoi after successfully capturing the AI that they were seeking. Learning that he would be handed over if Playmaker lost, Ai declared "Cyberse - Data Material Unlock" and generated a Data Storm, shocking everyone present. He then told Playmaker to ride it using his Duel Board to surf through the Data Storm while Ai declared the beginning of a Speed Duel.[1]

After the conclusion of the Speed Duel, the Data Storm continued to linger in LINK VRAINS, allowing other Duelists to ride them. Speed Duels were considered too dangerous for regular users and anyone caught attempting them had their VRAINS accounts suspended.[2] 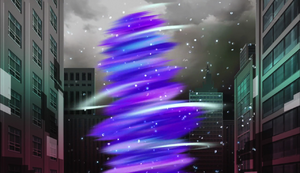 When a Data Storm is active, there is a chance of it becoming unstable and creating a vortex of it which swallows up all things in its path. The resulting tornado is extremely dangerous and destroys everything in its path. Escaping from it after being swallowed is similarly difficult[3], and this feat has only been successfully accomplished by Duelists who wield the "Storm Access" Skill.

The transmission speed of a Data Storm can reach over 4000 gigabytes per second[4], an amount that is easily capable of overloading computer systems.

By utilizing the data material that creates a Data Storm, the Skill "Storm Access" can be used to access these cards.[6] These cards are permanently added to the Duelist's Extra Deck and can then be made into physical cards using an apppropriate technology.[2] When Link Summoned, the cards obtained from Data Storms can be distinguished by the wave of cubes that create the monster's body, as compared to Link Monsters originally owned by the Duelist which appear from a ball of light.

A Data Storm always seems to occur regardless of the location in the LINK VRAINS, including usually inaccessible areas such as SOL's mother computer database[4], whenever the LP of a Duelist with the "Storm Access" Skill is reduced to the necessary amount required to activate it. It is said that normal Duelists are unable to utilize this Skill. Ghost Gal hypothesizes that only people with a special connection to data material such as Playmaker and Varis are able to do so, and that this connection is related to the Hanoi Project.[6]

Data Storms can adopt different appearances depending on the player manipulating it, or if programs such as the Data Gale are used to alter its programming. The Data Storms controlled by Varis take the form of tsunamis, while the Data Storms that appear before Playmaker are often cyclonic constructs.

By increasing the density of the Data Storm, an area is created where it is possible to utilize the Duel Board without the Data Storm winds. This allows Duelists to freely maneuver about the LINK VRAINS environment.[7] However, this also traps them and prevents them from logging out until the Duel is over.[8]

The Data Storms of a Data Gale are black in color.