From Yugipedia
Jump to: navigation, search
For other versions of this character, see Devack (disambiguation).

Devack, known as Demak in the Japanese version, is Roman Goodwin's right-hand man and a member of the Dark Signers. He freed Greiger from his prison transport, and offered him the chance to fulfill his desire for vengeance. He was also responsible for the Minus Curse that infected the Spirit World with the help of his subordinate, Zeman The Ape King. 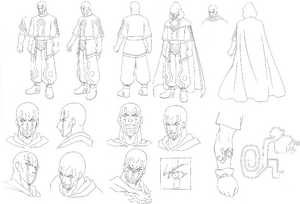 Lineart of Devack, including his Mark of the Shadows.

Devack is a tall bald dark-skinned man with purple eyes. He wears the black robes of the Dark Signers accented with yellow stripes; Devack wears his hood almost constantly. His Mark of the Shadows is the monkey. As a Dark Signer, his sclera are black and he has dark red marks running down his face, over his eyes.

Devack had great loyalty to the Dark Signers' cause and to Roman in particular. His final words were an apology to Roman for losing. He also looked down on those who were not Signers, and enjoyed the pain of others, as seen when he tried to show Luna more sadness by using "Ancient Fairy Dragon" against her.[1][2]

It is unknown how Devack became a Dark Signer. At some point upon his rebirth, he met Roman Goodwin and the other Dark Signers, and he pledged his loyalty to Roman. At some point, he was given Ancient Fairy Dragon by Roman to set up his eventual confrontation with Luna.

Devack was present during the meetings between Roman and Kalin Kessler, and they discussed recent events as the conflict between the Signers and the Dark Signers escalated. Devack did not take an active role in proceedings until two "Earthbound Immortals" were Summoned in New Domino City. He left the original Ener-D Reactor, arriving by helicopter to free Greiger from Sector Security custody with an "Axe of Despair" card, as his transport guard's souls had been absorbed by the "Earthbound Immortal Ccaryahua". Devack invited him to join them and get revenge on Rex Goodwin for the destruction of his village. They picked up Misty Tredwell and Carly Carmine from the destroyed Arcadia Movement building and returned to the Ener-D reactor.

He finally showed himself to his rivals, the Signers, after Roman's Shadow Duel against Yusei Fudo concluded. Before their departure, he showed Luna that he possessed the "Ancient Fairy Dragon" card, and so in order to get it back, she must Duel him. Later on, as each one of the Signers was set on defeating their respective opponent, they split up and headed to each of the four control units of the Original Ener-D reactor. As Luna and Leo were taken by Trudge to where Devack was, she instead went into the Duel Monsters Spirit World in order to free Ancient Fairy Dragon from her imprisonment with the the help of her servant, Regulus. However, when Leo found the control unit, Devack approached him while the Monkey geoglyph materialized. Leo then bravely challenged him, and stating that if he defeated the Dark Signer then Luna wouldn't have to Duel him.

Despite Devack's warning that Leo wouldn't be able to save himself and his sister, as he was not a Signer, the Duel was still on. Devack was quickly able to inflict damage to his opponent at the start, but Leo counterattacked with "Power Tool Dragon", his ace card. Devack then Summoned the Dark Synchro Monster, "Zeman the Ape King". Eventually, Leo was able to destroy his Dark Synchro Monster, at the exact same time that Regulus destroyed Zeman in the Spirit World, by utilizing his "Power Tool Dragon". However Devack Summoned his true ace card, "Earthbound Immortal Cusillu". He attacked directly, but Leo prevented himself from being defeated. Then, Luna arrived, and took Leo's Duel Disk and the twins Dueled together; Devack expressing thanks that he was able to Duel a true Signer. 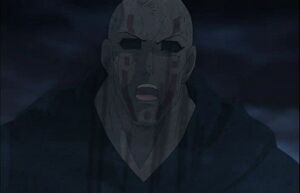 Regretting his defeat, Devack turned into dust while asking Roman for forgiveness for failing the Dark Signers (In the dub, he tried to drag Leo and Luna with him to the Netherworld, but failed when Yusei came in and saved them).

Devack is returned to life.

When Rex Goodwin was defeated in the final battle and the King of the Netherworld was destroyed, Devack was restored to life, along with the other Dark Signers except for the Goodwin brothers. It is unknown whether he kept his memories of his time as a Dark Signer.

Devack uses an Ape Deck which primarily focused on filling his Graveyard with Beast-Type monsters for his "Closed Forest". He also used several support cards for Dark Synchro Monsters.