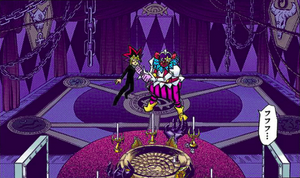 The Devil's Board Game

The Devil's Board Game is a Shadow Game version of a reaching the goal dice game, that appeared in the manga.

As per the Devil's Board Game rules, each player bets a number of years and the game's loser ages by the amount of years they bet. For the Millennium Puzzle's ownership, Mr. Otogi dueled his gaming mentor, Sugoroku Mutou, using this dice game. Otogi lost and consequently aged 50 years in one night.

In his pursuit for revenge, he forced his son Ryuji Otogi to duel Sugoroku's grandson Yugi Mutou in Dungeon Dice Monsters, but Ryuji lost. After the loss, Otogi attempted to use another Devil's Board Game to face Yugi, but accidentally set the store on fire before the dice game could commence. After Yugi reassembled the Millennium Puzzle despite the growing fire, Katsuya Jonouchi used the board from this game as a lever to remove the pin holding the Millennium Puzzle in place.