Dexter, known as Tenpei Hayano in the Japanese version, is a friend of Luna, Leo, and Bob in the Yu-Gi-Oh! 5D's anime. An alternate version of Dexter appears in Yu-Gi-Oh! ARC-V.[1]

Dexter has brown hair and eyes, and is not seen without his glasses. He usually wears his Duel Academy uniform but when out of uniform he wears a white collared shirt with a red bow tie and suspenders, navy blue shorts, white knee socks, and brown dress shoes.

He and Leo went to the Daimon Area to duel the Black Rose. Dexter had modified his Deck specifically to duel against her. When he first meets Yusei, he was afraid of him due to his criminal mark, but began to admire him once Leo told him he had customized his and Luna's Duel Disks to fit them and was strong enough to enter the Fortune Cup.[2]

Dexter has enlisted into The New Domino City Duel Academy along with Leo, Luna and Akiza. He was in danger of being expelled by the vice-principal, Rudolph Heitmann, who despises them for having low grades and low-Level monsters. He is saved after Yusei defeats Heitmann in a Duel.[3]

Later, he accompanies Leo and Luna into a supposedly haunted forest. Leo wants to turn back, but Dexter reminds him that it was his idea to explore the forest in the first place, and the group continues in. After Luna and Leo lose him (Leo was chasing after Luna when the latter fell into a trance), Dexter runs to Poppo Time to tell Yusei what has happened.[4]

He is also frequently seen in the stands along with his friends Patty and Bob watching Team 5D's Duels in the WRGP.[1][5][6][7]

During Yusei's duel with Z-one, he is seen cheering Yusei on.[8] 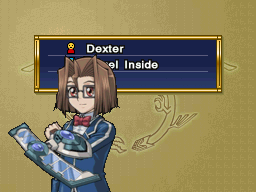 Dexter, in Over the Nexus

In Tag Force 5 and Tag Force 6, Dexter appears exclusively during story events, and does not duel.

His Deck is unknown, but he had once claimed to have built an anti-Plant Deck to counter Akiza, though he had never dueled on-screen.

The only shown card from his Deck is "Batteryman AA".

During a school lesson, he was seen using a copy of "Armed Samurai - Ben Kei".