From Yugipedia
(Redirected from Die)
Jump to: navigation, search
This article is about the items. For the archetype, see "Dice" (archetype).
"Die" redirects here. For deaths within the series, see List of deaths. 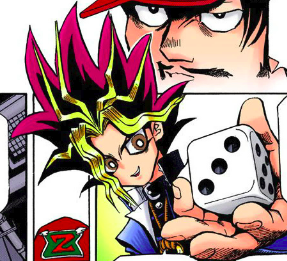 Dice (singular die) are throwable items, with multiple resting positions used for generating random numbers. The most common configuration of dice is the six-sided cube. Ten-sided dice are also used in Monster World.

In Duel Monsters and its real-world counterparts, the OCG and TCG, numerous cards effects involve rolling a six-sided die, with faces numbered 1 to 6. 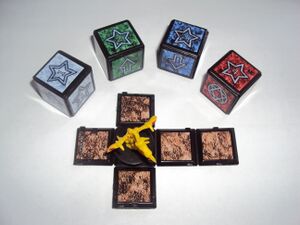 The game Dungeon Dice Monsters uses six-sided dice. The faces of the dice contain different crests. The crests rolled determine if the player can Summon a monster or store crests in their pool. Monsters are stored inside the dice. When a monster is Summoned, its die is unfolded and placed on the field to create a path.

Other games featuring six-sided dice include the dice game and dice in cup. 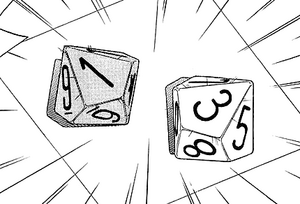 The game Monster World uses ten-sided dice. Each player rolls two such dice to generate numbers between 00 and 99. Dark Bakura and Dark Yugi were able to manipulate the outcome of the rolls using a "double hit" technique.