The Different Dimension Airship (異次元飛行船 Ijigen Hikōsen) is an airship contained within the pocket dimension of the Emperor's Key in Yu-Gi-Oh! ZEXAL.

The Different Dimension Airship is an airship with light green glowing and golden circle rails all over them made out of hundreds of gears. It is mysteriously made up of one hundred gears in which each is marked by numbers that respond to "Number" cards that were absorbed by Astral. Whenever Astral obtains a new "Number", he activates a gear and moves a majority of gears. Astral adds to his observations that this object does not come from this world and implied that it may have to do with the person who is responsible for the loss of his memories.

The ship has a gondola beneath the center which contains the bridge. Passengers can only enter it with the "Number 66: Master Key Beetle" card, which is able to turn into the airship's key. 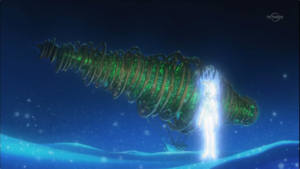 After Astral arrived on Earth and helped Yuma Tsukumo defeat Reginald Kastle, he resided within this structure whenever he was not on Earth with Yuma.

The "Numbers" pillars within the ship.

Inside the ship's construction is a puzzle,[1] which is made up of one hundred gears marked with numbers that react with the "Number" cards that Astral absorbs, making them move and glow. When a "Number" appears on the machine it starts turning on its pieces.[2] Astral assumed that it had to do with the person who is responsible for the loss of his memories.[3] The "Number" cards also appear to lock into the structure and become a part of it, which keeps them safe. The "Numbers" are printed on square pillars that stick out and glow, but if the Key is separated from Yuma's Deck, then the pillars go back into the structure and the "Numbers" become cards again, meaning they are in danger of being taken.[4]

When Astral was confronted by The Door about the true secrets of his memories, it resulted in a Duel against the Shadow Giant, which took place atop the ship.[5]

When Astral was given "Number 66: Master Key Beetle" by Vector, he found that it contained his memories of how to operate the airship. The card literally turned into the airship's key, allowing Astral access to the cockpit. The ship then appeared on Earth, crushing the top of the nearly reconstructed Heartland Tower. Yuma wished to use the airship to travel to Barian World and rescue Ray Shadows, who had been taken by Vector. They eventually depart to do so, with Shark, Rio Kastle, Kite Tenjo, Orbital 7 and the Super Secret Number Card Investigation Club in tow. The occupants each took stations onboard the ship and managed to get it to fly through the air, eventually entering a portal. They were pulled out in "Sargasso the Different Dimension Battlefield", where they were attacked by various monsters. Yuma, Shark, Kite, Rio and Bronk beat them back with their ace monsters, defending the ship from atop it. However, they eventually crashed and found Vector, Dumon and Mizar waiting for them.[6]

A black hole appeared in "Sargasso" and began to suck the airship into it. Vector suggested that if Yuma hands over the "Numbers", he could alter the effect of "Sargasso Lighthouse" to save Yuma's friends. Yuma was unsure what to do, but Tori contacted him and told him to keep Dueling. Taking charge, Tori sent the others aboard to various stations, while Kite told Orbital 7 to return to the airship to help. They managed to take the ship back through the black hole to safety.[7] When the battles at "Sargasso" ended, the airship took them back to Earth.[8]

The map of the Mythyrian "Numbers".

Astral later revealed that Kazuma Tsukumo left a recorded message within the Different Dimension Airship that instructed Yuma and Astral to collect the seven Mythyrian "Numbers" before the Barians are able to obtain them.[9]

Those within the airship are able to see Astral, regardless of whether they could do so under normal circumstances.[9]