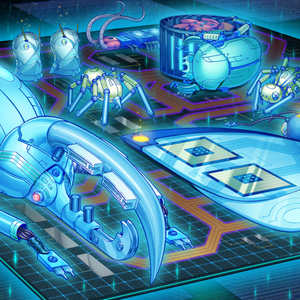 Watch out for the evolution of these unstoppable bugs!

Digital Bugs in Cyberspace is the twelfth Solo Mode Gate in Yu-Gi-Oh! Master Duel, and focuses on the Digital Bug archetype.

Like most Gates in Solo Mode, each Duel can be played with either the player's own Deck or a provided Loaner Deck fitting the theme of the Gate, with separate rewards for each. Completing this gate for the first time unlocks the Insect Metamorphosis Secret Pack for 24 hours.

Learn the ins and outs of the "Digital Bug" Deck.

This chapter serves as a tutorial for using the Digital Bugs.

Bring out the full potential of "Digital Bug" Monsters by using Cards like "Stumbling" and "Butterspy Protection." Build your combos with Cards like "Maxx "C"" and "Pot of Prosperity," whose effects will help you draw the Cards you need faster!

A Deck that teaches you the basics of "Digital Bugs." Insect-Type Xyz Monsters that are Summoned with "Digital Bug" Monsters as their Materials will gain a range of Effects. Use the Effect of "Bug Emergency" in the Graveyard to give "Digital Bug Rhinosebus" and "Digital Bug Corebage" their Effects.

This chapter becomes available after completing the first Duel. It can be unlocked by spending 200 LIGHT Orbs.

A Deck that combines "Digital Bugs" and "Battlewasps." As both of them are Insect-Types, their support cards will work well together to create a versatile and fun Deck. Although "Digital Bugs" mostly Summon Xyz Monsters, try also Synchro Summoning by using them with "Battlewasp - Sting the Poison" and "Transcicada."

A Deck that combines "Digital Bugs" and Insect-Type "Traptrix" Monsters. Guard your "Traptrix Allomerus" well with "Trap Hole" and "Hole" support cards. You can also use "Bug Matrix" and "Bug Signal" to your advantage.

A Deck that combines "Digital Bugs" and Insect-Type "Kaijus." Attack the "Kaiju" Monsters Special Summoned to your opponent's Field with Xyz Monsters. Also, you can use "Kumongous, the Sticky String Kaiju" as an Xyz Material for "Number 28: Titanic Moth," so consider using the Spell Card "Owner's Seal" to regain control of it.