From Yugipedia
(Redirected from Dimensional Transporter)
Jump to: navigation, search

The Interdimensional Teleporter is a device constructed by Kite Tenjo and Quinton in the Yu-Gi-Oh! ZEXAL anime. 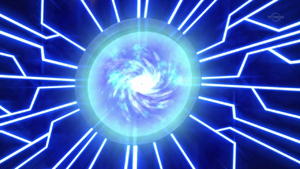 Using it, they planned to open a gateway to the parallel universe and send Yuma Tsukumo to Astral World in order for him to rescue and retrieve Astral, so that he could help them locate the Numeron Code and battle the onslaught of the Barians. The device is powered by King's Coins, which are actually made of a substance from Astral World named Astralite. When they attempted to send Yuma, Scritch attacked and cut the power before forcing a Duel with Kite and Quinton. As they Dueled, Orbital 7 reset the system and began charging the device again.[1] After their victory, the recharged device successfully sent Yuma on his way.[2] The energy generated by Yuma's Duel against Eliphas caused the device to overload, subsequently causing it to explode.[3]