"Djinn" ( Majin) is an archetype of mostly DARK Fiend monsters. The intended members of the archetype, i.e. the monsters that receive "Djinn" archetypal support, are all Xyz Monsters used by Yuma Tsukumo in Yu-Gi-Oh! ZEXAL. Gameplay-wise, they mostly focus on anti-Xyz tactics while also supporting one another via their own effects.

Due to their Japanese names, a number of older cards, such as the "Djinn of Rituals" series ("Ritual Djinns") and "Dark Balter the Terrible" ("Djinn Dark Balter"), also fall into this archetype. However, because their TCG and OCG support only works on Xyz Monsters, the only other cards which receive support from them are "Queen Dragun Djinn", "Number 65: Djinn Buster" and "CXyz Mechquipped Djinn Angeneral". 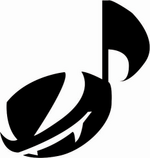 The symbol of the musical "Djinn".

The intended members of the "Djinn" archetype are all two-horned, musician-like monsters.

Their symbol is a musical eighth note featuring a fiendish-looking face.