Playgrounds in Domino City appear on at least two occasions in the Yu-Gi-Oh! manga and Toei anime. It is unclear if they are distinct playgrounds or part of the same larger playground. 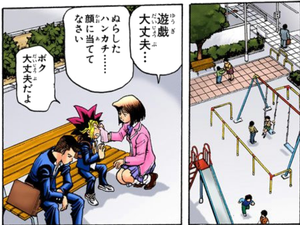 This playground is located next to a road, has plants growing around it, tiled pathways, benches, a swing set, and a slide.[1]

Yugi Mutou, Anzu Mazaki, and Hiroto Honda went here after one of Hirutani's henchmen punched Yugi. They sat together on one of the benches while Anzu looked after Yugi's injury. Honda then told them of Katsuya Jonouchi's history with Hirutani.[1] 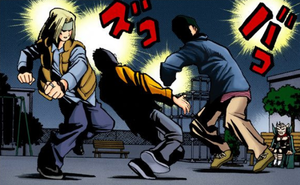 The staged attack in the playground

This playground is located next to a road, is partially fenced, has plants growing around it, tiled pathways, benches, a swing set, and a climbing frame.[2]

Tomoya Hanasaki went to the playground one night, while dressed as Zombire. He witnessed what he believed to be someone being attacked. Wanting to be like Zombire, he intervened and was able to ward off the attackers. However the attackers and victim were three delinquents paid by Hanasaki's father to stage an incident that would help give Hanasaki confidence.[2]