From Yugipedia
Jump to: navigation, search
For other versions of this character, see Don Zaloog (disambiguation).

Don Zaloog is the character spirit of the card "Don Zaloog" and the fourth of the Shadow Riders. He is the only Shadow Rider that never Dueled Jaden Yuki. 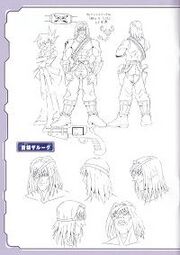 Zaloog's outfit consists of the standard Dark Scorpion uniform with additional gun straps, a strap of bullets and an eye patch. His grey hair is shoulder length, with a fringe covering most of his forehead.

In the dub, Zaloog's voice resembles that of Christopher Walken.

Don Zaloog a Duel Monster spirit of the card, "Don Zaloog", brought to life by the power of the Shadow Charm eye patch he wears. He is also the leader of the band of thieves known as the Dark Scorpion Gang (Black Scorpion Graverobber Gang; 黒サソリ盗掘団, Kurosasori Tōkutsu-dan), who were also brought to life by the item. Zaloog is sort of a Robin Hood figure, as he steals from the rich and never hurts or kills anyone. He masquerades as a detective named Police Inspector Magure (Detective Zaloog in the dub), sent to assist the students in hiding the remaining Spirit Keys, while his posse work on taking the keys incognito. Cliff poses as a security team member, Chick poses as a student, Gorg posed as a janitor, and Meanae posed as a nurse. However, since they fail to obtain the keys in a Duel, they are unable to unlock the Spirit Gates of the Sacred Beasts. When Zaloog and his gang are discovered, he and Chazz Princeton Duel with all the remaining keys on the line. In the end, he and his cohorts are defeated, and the power of his Shadow Charm is nullified.

After reverting back to their spirit forms, the Dark Scorpions join the many weak monsters in Chazz's care to the young Duelist's annoyance. He never uses them however and they haven't been seen since.