From Yugipedia
Jump to: navigation, search
For other versions of this character, see Dragan (disambiguation).

Dragan is a character appearing in Yu-Gi-Oh! 5D's. He is a member of Team Ragnarok competing in the WRGP. He is the owner of "Thor, Lord of the Aesir" and the Thurisaz Rune Eye. 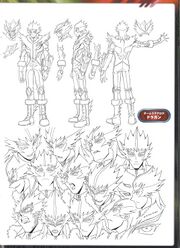 The name Dragan is of Serbian origin and is derived from the slavic element 'dorgu', which means 'the one who is precious'.

Some time before the World Racing Grand Prix, Dragan went exploring with his father and found "Thor, Lord of the Aesir" in a cave with tree roots under a church. Once he grabbed the card, the cave started to collapse and his father was injured. When leaving the hospital, he is encountered by Lazar who offers him a chance to Duel Jack Atlas for the title of Duel King, where he would receive money for his father's injuries.

However, he would only receive the money if he lost on purpose and made it look like Jack defeated him easily so he could uphold his name as the king. Dragan almost used a card that would likely have won him the Duel, but nevertheless accepted defeat so that his father could receive treatment.

Some time later, Dragan is caught in an avalanche while mountain climbing. Fortunately, he is saved by his Rune Eye. After this, he is approached by Halldor who encourages him to use "Thor" and join him. Dragan accepted and, together with Broder, they formed Team Ragnarok.

Dragan, along with his companions, were on a plane flying towards New Domino City for the WRGP. At the same time, the Three Pure Nobles achieved falsification of history. Dragan, along with the others, noticed that their Aesirs had protected them from the wave. Dragan also noticed another "phenomenon" which others had not noticed.

Later, Dragan and his team appeared publicly to host an exhibition Duel against the other teams in the WRGP. He chose to Duel Jack Atlas. During the Duel, after Summoning "Thor" and attacking "Red Dragon Archfiend", the two monsters emit a strange wave of energy while battling. Because the force began to destroy the building, the duel was called off.

After his team meets up with 5D's, Dragan reveals the truth to Jack about their Duel from three years ago. He also states that their score will be settled when they Duel in the semifinals, to which Jack agrees.

Finally, the day of the WRGP semifinals begin, and Dragan faces Jack in a long-awaited rematch. Strangely, they both get the same hand as that of their first Duel, therefore repeating the same moves. However, this time Dragan strategically calls forth "Thor" and pushes Jack to a corner by reducing his Life Points dramatically.

In episode 147, he and his teamates have survived. They were last seen cheering on Yusei during his Duel against Z-ONE.

Dragan plays a "Nordic Beast" Deck, which is based on iconic mammalian animals from Norse mythology, buffered with Trap support. His ace card is "Thor, Lord of the Aesir".