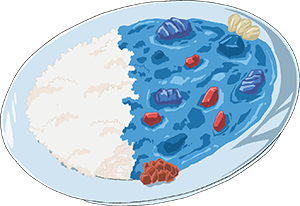 A dish of Dragias Curry.

Dragias Curry (ドラギアスカレー Doragiasu Karē) is a curry rice dish in Yu-Gi-Oh! SEVENS. It was cooked by Romin Kassidy to apologize to Luke for spying on him and his friends. Luke gave the curry its name for its blue coloration, which is close to that of his "Multistrike Dragon Dragias".

Romin attempted to apologize to Luke for spying on him under Roa's orders, but he continuously rebuffed her, prompting Yuga to suggest cooking for Luke to make it up to him. This proved to be a difficult prospect for Romin, who not only had no cooking experience, but little idea behind the concept at all, resulting in Gavin, Rayne and Rino having to micromanage her cooking. Despite this (and Romin somehow adding the ingredients for gunpowder into the food), the curry proved to be surprisingly tasty, despite being blue. The smell alone was enough to entice Luke into Roa's apartment, despite his grudge against Romin, and he eventually warmed up to her. After he named the curry "Dragias Curry" due to its color, Romin attempted to add more spices to simulate the second attack of "Multistrike Dragon Dragias", but this resulted in a titanic wave of curry that flooded the entire apartment complex.[1]

After the apartment was cleaned up, it kept smelling of curry for some time, something Roa was not above reminding Romin of in order to guilt-trip her into doing favors for him.[2]