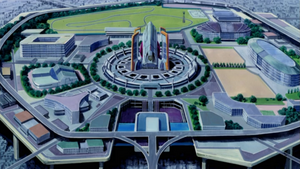 Duel Academy, known as Duel Academia in the Japanese version, is a setting of the third arc of Yu-Gi-Oh! 5D's, located in New Domino City. Unlike the GX Duel Academy, this Academy isn't divided into three separate dorms based on rank, and it is not a boarding school. Instead, it is similar to a traditional school. The students are divided into classes based on their age and the lower level students have lessons based around specific types (and presumably attributes, however this has not been shown) of monsters. The upper level student curriculum is currently unknown.

The Academy itself is also divided into various areas, as can be seen on the picture. One of these areas is a large track use for learning and practice riding a Duel Runner with an instructor. Exams for Duel Runner licenses can also be taken here, as shown when Akiza applied for her own.

In flashbacks of Akiza's past, it was shown that she attended a Duel Academy as a young teenager. In this one, the uniforms look a lot more formal and gallant. The lower class females wear red jackets and a yellow bow tie,while the lower class males wear blue jackets with either a white or blue shirt and a red tie. The upper class females wear long knee length red jackets, black tights, and don't wear the yellow bow ties. It is unknown if the upper class males have to wear the red ties or if they are also permitted to not wear them. The lower class backpacks are red (females) and green (males) and their Duel Disks are stored in it with the long side folded against the right side of the backpack. The upper class are allowed to bring briefcases instead if they want.

The Tag Force 4 player character, with the Duel Academy students from the City.

The Tag Force 4 player character, with the Duel Academy students from Tops.